After a 4-day straight run of loses, gains in AIRTEL and NESTLE Stocks on Friday secured a marginal positive close for the Nigerian Stock Exchange.

The Financial Services industry (measured by volume) led the activity chart with 457.851 million shares valued at N3.773 billion traded in 8,062 deals; thus contributing 61.92% and 44.06% to the total equity turnover volume and value respectively.

The activity level continued to trend downwards, portraying a holding position being taken by most investors. The volume of shares traded decreased by 29.5% while the value of traded shares decreased by  15.4%. 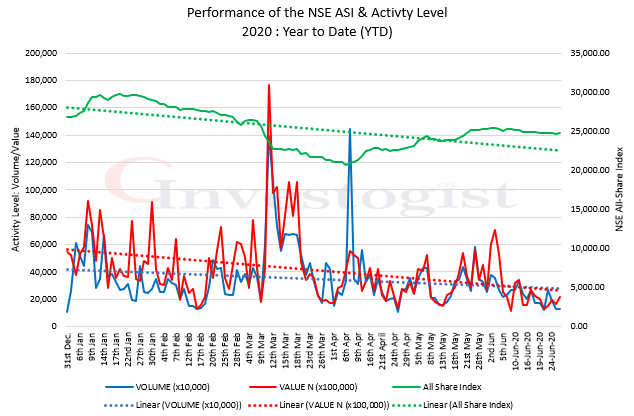 The no of deals being done on the Market has maintained a straight trend line, despite the continued reduction in trade volumes and value. 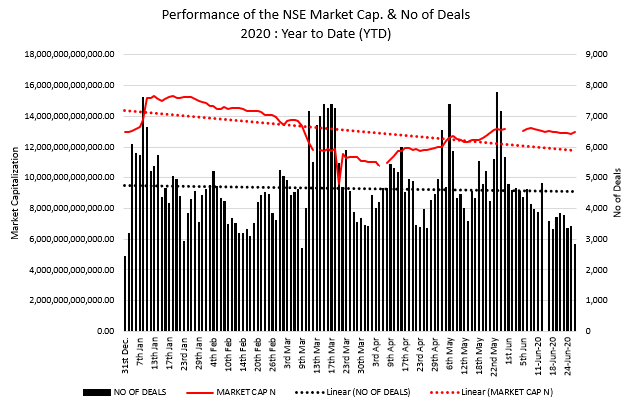 At the end of trading on Friday, the NSE ASI losses moderated to -7.5% loss YTD. Below is the performance of the 5 indices under our watch, YTD;

The top gainers and losers were; 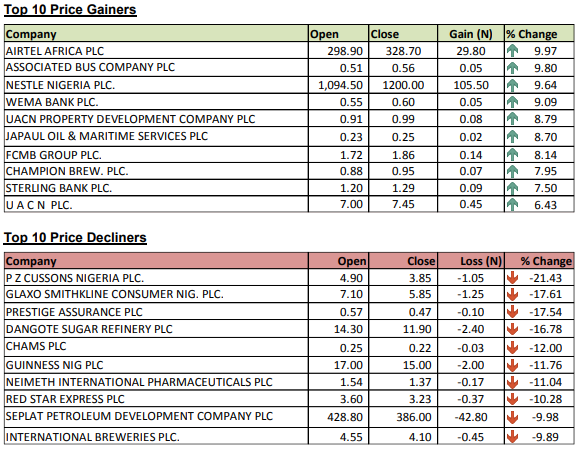 Going into the last days of the second quarter, we anticipate the activity level to remain subdued. We also expect Investors to sell off on many bellwether stocks, ahead of the commencement of the earning season.

With restricted economic activity for the most of the second quarter, it is expected that the H1 Earnings report by companies will reflect a reduction in revenue and subsequently net income.

Stock Pick for the week ahead

All the stocks on our watchlist this week are currently trading above our estimated fair value prices. We have subsequently marked 8 out of the 10 stocks as SELL because of this.

Some resilient stocks like NESTLE, PRESCO and OKOMUOIL are unlikely to drop as much as the estimated fair value, we will review the recommendations after the earnings season.

WAPCO low valuation is attributed to the poor financial performances of the recent years, the company has addressed the fundamental causes of the poor performances. It has reported impressive profit growth in the past couple of financial reports. We expect the profit growth to continue, hence the BUY recommendation.

Covid-19: When life will return to normal – Experts