Analysis of the report: Income Statement

By reducing interest expense on deposits from customers from N94.016 billion to N83.288 billion, the Banking group was able to achieve a 5.66% reduction in its interest expenses.

Analysis of the report: Statement of Financial Position (Balance Sheet)

Analysis of the report: Statements of Cash Flows 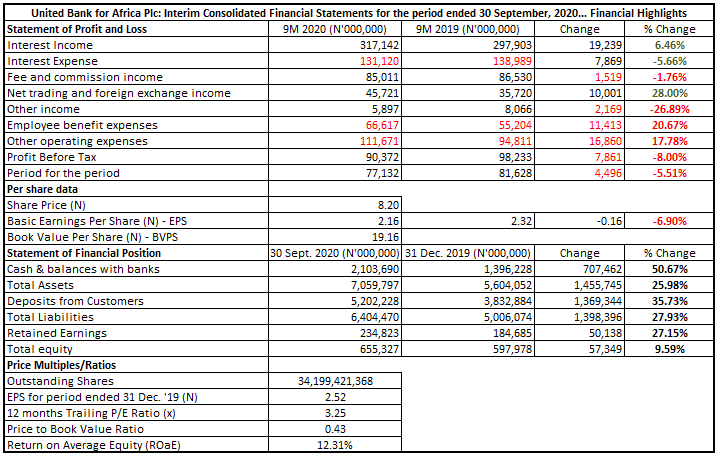 United Bank for Africa Plc. (the “Group”) is a Nigerian registered company incorporated on 23 February 1961 to take over the business of British and French Bank Limited (BFB).

UBA listed its shares on the Nigerian Stock Exchange (NSE) in 1970 and became the first Nigerian bank to subsequently undertake an Initial Public Offering (IPO).

The Bank and its subsidiaries are primarily involved in corporate, commercial and retail banking, trade services, cash management, treasury and custodial services.

The company’s registered address is at 57 Marina, Lagos, Nigeria.

The Share price of UBA closed at N8.20 at the end of trading on Friday on the Nigeria Stock Exchange, 2.96% lower than its opening price.

We have a HOLD rating on the shares of United Bank for Africa Plc.