Nigerian Stock Exchange: Week ended 21.08.2020 review and Stock Pick for the week ahead

In the week ended 21st August 2020, the Nigerian Stock Exchange equities market having started the week with loses on Monday, went on to gain in each of the next four trading sessions, to close the week higher than it started.

Investors’ saw a N12.224 billion addition to their wealth, as the market capitalization stood at N13.158 trillion at the end of Friday’s trading session.

The improvement in activity level seen in the preceding week was reversed in the week in review. The activity level waned as both volume and value of shares traded declined by 28.3% and 27.35% respectively.

The Financial Services industry (measured by volume) led the activity chart with 624.278 million shares valued at N6.181 billion traded in 8,313 deals; thus contributing 65.68% and 61.06% to the total equity turnover volume and value respectively.

The activity chart below depicts the reversal in the activity level, with the All-Share Index seemly flat lining between 24,750.00 and 25,250.00. 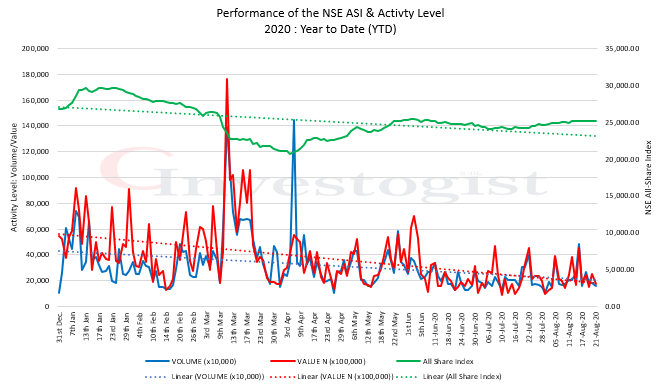 While the waning activity level may be worrying to the NSE, the chart below even shows a more worrying trend. The number of trades/deals being done on each trading session is also declining, which can either mean that market participants are turning away from the market or Investors tilting more and more towards a holding position. 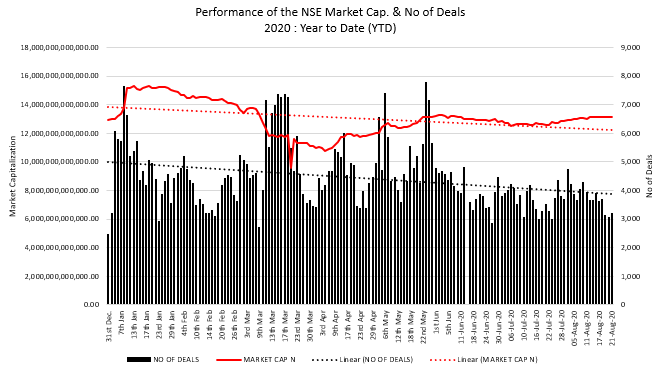 At the end of trading on Friday, 21st August, the NSE ASI loss moderated to -6.04% YTD. Below are the YTD performances of the 5 indices under our watch;

Three of the five indices under our watch closed the week in positive; Insurance Index was up by 4.40% driven mostly by gains in LASACO and CORNERST.

The NSE All-Share Index and Market Capitalization both appreciated by 0.09% to close the week at 25,221.87 and N13.158 trillion respectively.

Thirty-one (31) equities appreciated in price during the week, higher than twenty-nine (29) equities in the previous week.

See top gainers and losers in the table below 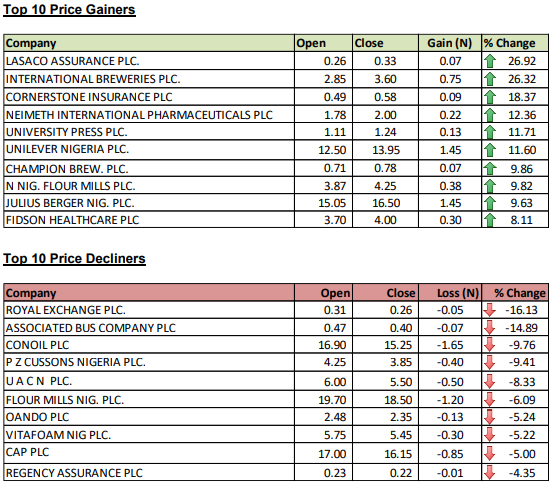 Heading into the last week of the month, we anticipate the market performance will be relatively unchanged. It is most likely to be driven by bargain hunting, and profit taking.

LASACO topped the gainers table in the week in review, justifying the BUY rating placed on it in our last Stock Pick. The stock makes our Stock Pick for the week ahead, with the rating changing to HOLD, as we approach its dividend qualification date

UPL and REDSTAREX both made a return to our stock pick, with ratings changed to HOLD after a modest capital appreciation.

Contrary to our expectations, UACN share price suffered further decline in the week in review, despite this, we maintain the ACCUMULATION rating on the stock, as it trades further below our valuation of the company.

We are neutral on UNITYBNK, although it makes a very good JIJO stock, its huge accumulated loses and the fact that its major shareholder is AMCON (34%) reminds one of the defunct SKYBANK, hence our neutral position on the stock.