The activity level was mixed in the week, with the volume of shares traded increasing by 12.79%, while the value of the traded shares decreased by 27.05%.

The Financial Services industry (measured by volume) led the activity chart with 586.761 million shares valued at N4.022 billion traded in 8,483 deals; thus contributing 54.76% and 54.47% to the total equity turnover volume and value respectively.

Trading in the top three equities namely Transnational Corporation of Nigeria Plc, UACN Plc and United Bank for Africa Plc. (measured by volume) accounted for 396.337 million shares worth N1.373 billion in 1,845 deals, contributing 36.99% and 18.59% to the total equity turnover volume and value respectively.

The activity chart as can be seen below, shows a continued decline in the activity level, with the All-Share Index continuing on the same pattern of gradually but continued upward trajectory. 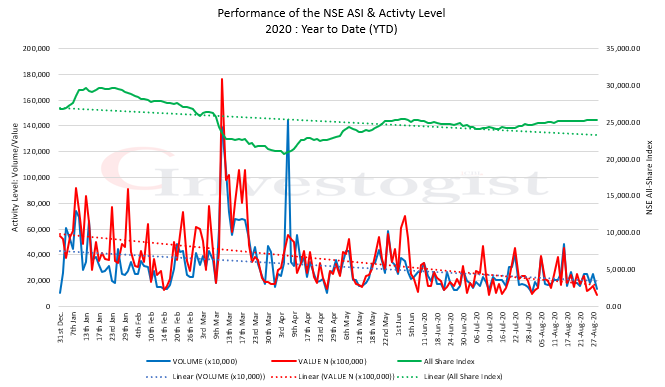 Just as the volume and value of trade continues on a declining path, the total number of deals being done in a trading session is also continuing on the same declining path. 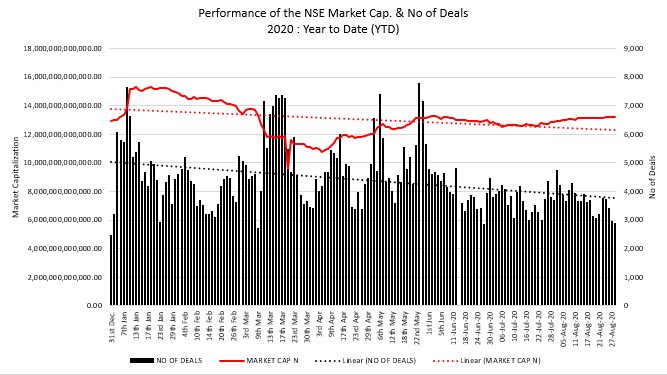 At the end of trading on Friday, 28th August, the NSE ASI loss moderated to -5.71% YTD. Below are the YTD performances of the 5 indices under our watch;

Only one of the indices under our watch closed the week in negative; the banking index decreased by 0.23% in the week. The oil and gas index remained flat, while the insurance, consumer and industrial good indices appreciated by 2.80%, 1.12% and 0.64% respectively.

Twenty-nine (29) equities appreciated in price during the week, lower than thirty-one (31) equities in the previous week.

See top gainers and losers in the table below: 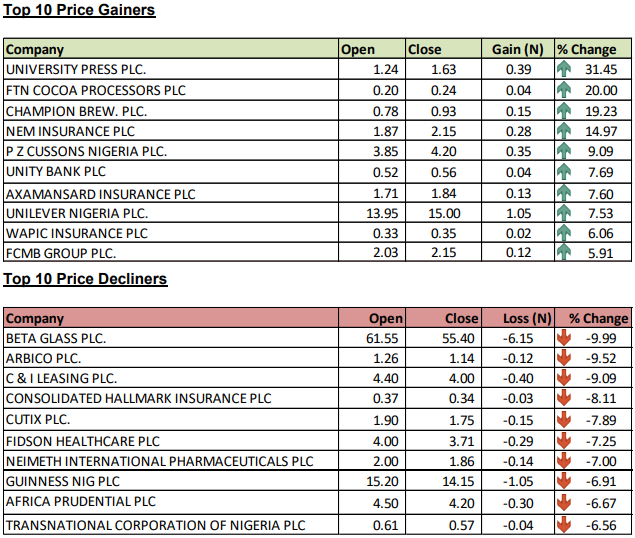 We expect the market performance to be driven by a mixture of bargain hunting and profit taking, while the activity level remains subdued.

See below stock pick for the week

LEARNAFRCA, UPL, REDSTAREX, GUINNESS and CUTIX had all released full year financial statements in the preceding week, and recommendations has been made based on their financial performances.