The Nigerian Aviation Handling Company Plc (NSE ticker: NAHCO) reported a huge drop in profit for the 2020 financial year, showcasing the extent of the disruption in businesses caused by the Covid-19 pandemic.

Analysis of the statement of profit/loss shows that while the revenue from Passenger/Aircraft handling declined by 52.15% (2019: N5.351 million), as a result of restrictions in movement of people and near grounding of passenger airplane fleets, the revenue from Cargo handling was relatively unchanged (2019: N3.608 billion).

The company’s operating cost dropped by 23.14% to N5.044 billion, from the N6.563 billion spent in 2019. The reduced operating costs can be attributed to a reduction in the payroll costs, reduced allowances and others our analysis showed.

Most of the high ticket items on the Selling & Administrative Expenses remained relatively the same. The highest of them; Payroll costs, dropped marginally from N1.134 billion to N1.084 billion.

As at 31 December, 2020, NAHCO held a total of only N2.705 million Loans & Borrowings (both current and non-current liabilities). 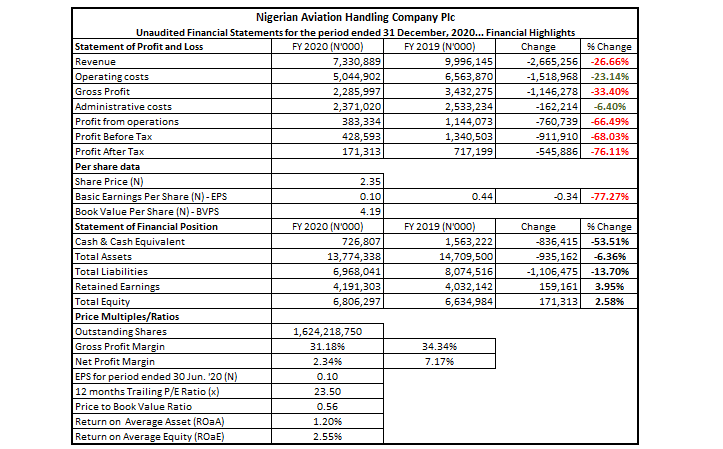 The financial statements have been prepared in accordance with International Financial Reporting
Standards (IFRS).