UAC of Nigeria Plc reports 93.4% drop in profit from continuing operations in H1 2020

By reducing its cost of sale, the company was able to maintain a double digit gross profit margin, with a marginal drop of 1.7% from that recorded in preceding year. Thus, the company’s Gross Profit dropped by 16.14% to N6.992 billion.

Shareholders of this renowned company would have thought the quarters of loses where behind them when the company discarded its loss making real estate subsidiary; UAC Property Development Company Plc, unfortunately that has not turned out to be so.

A review of the company’s financial position as at 30 June, 2020 shows that the company is still fundamentally strong, with a Total asset of N97.805 billion funded mostly by Shareholders Equity. Shareholders equity amounted to N59.085 billion in the period in review, which is 60.4% of total assets, while the total liability stood at N38.719 billion. 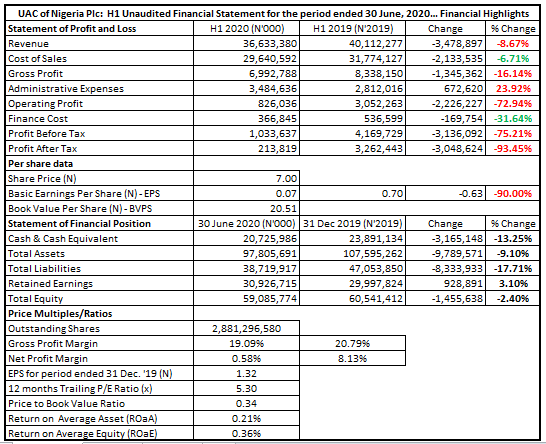 UACN’s net cash flow generated from operating activities dipped, falling to N2.401 billion from N5.985 billion in H1 2019, according to the data on the unaudited consolidated statement of cash flow. Overall, the cash & cash equivalents at the end of the period after adjusting for bank overdraft stood at N26.725 billion (H1 2019: N26.417 billion).

UAC of Nigeria Plc and its subsidiaries is a company incorporated n Nigeria. The Group is a diversified business wit activities in the following principal sectors; Animal Feeds and Other Edibles, Paints, Packaged Foods and Beverages, Quick Service Restaurants, Logistics and Real Estate.