FPL GW6 Scout Selection: Trent back in the team captained by Cristiano Ronaldo

The FPL Scouts hand the Captain’ss armband for Gameweek 6. Back in the team is Liverpool’s Trent Alexander-Arnold (£7.6m) who missed out on the clean sheet in GW5.

Ahead of GW6, 518,254 FPL Manager have brought in Michail Antonio (WHU) £7.9m, making him the top transfer in so far this Gameweek.

Before we disclose the Scouts Selection for GW6, let us take a moment to applaud the Kings of Gameweek 5. 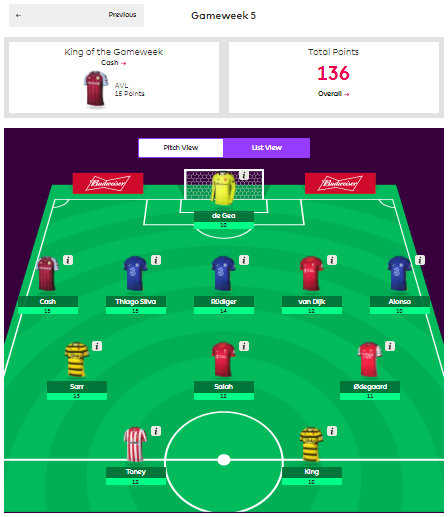 A home encounter with Brighton & Hove Albion gives Wilfried Zaha (£6.9m) the chance to bring in a big return in Gameweek 6 of Fantasy Premier League.

The Crystal Palace winger has a reliable recent record against the Seagulls, scoring four goals in their last four meetings at Selhurst Park.

Zaha was also in fine form in his previous home appearance in Gameweek 4, earning 12 points in a 3-0 win over Tottenham Hotspur thanks to a goal and assist.

That earns him a place in a Scout Selection that lines up in a 3-5-2 formation, with Cristiano Ronaldo (£12.7m) handed the armband and Mohamed Salah (£12.6m) named vice-captain.

The Crystal Palace No 1 has been a consistent source of returns at home this season. Guaita has kept a clean sheet in both his matches at Selhurst Park, totalling 15 points.

Liverpool’s right-back has recovered from illness for their trip to Brentford. Alexander-Arnold has averaged 8.5 points per match in his four appearances.

Manchester United’s left-back offers major all-round potential at home to Aston Villa. Shaw’s nine chances created in the last two Gameweeks were more than any other player in Fantasy.

The Leicester City centre-back has the aerial threat to punish Burnley’s weakness at set-pieces. The Clarets have conceded 27 shots from such situations, more than any other side.

Liverpool’s Egyptian has averaged 10 ppm this term, claiming double-figures in three of his five appearances. Salah is the most-owned player in Fantasy, found in over 57 per cent of squads, and is expected to be the top captain pick against Brentford.

An ownership of 5.5 per cent highlights his appeal as a differential for Monday’s encounter with Brighton.

The Leicester wide man has delivered double-figure hauls in each of his last two home matches with Burnley. Barnes also produced a goal and an assist in the UEFA Europa League against Napoli at King Power Stadium last week.

The Portuguese has been very unfortunate to record successive blanks. Playing as a centre-forward, Jota has produced seven shots and created seven chances in the last two Gameweeks.

Ronaldo has four goals in three matches in all competitions after returning to Old Trafford. Since making his second debut for the club in Gameweek 4, the Man Utd star’s 13 shots and 12 shots in the box are both more than any other player in Fantasy.

West Ham United’s forward has produced double-figures in three of his four appearances this term. Facing a Leeds United defence who are without a clean sheet in 2021/22, Antonio is among the top captain options for Gameweek 6.