Gameweek 1 has come and gone, and FPL Managers are still talking about the Bruno Hattrick and the Antonio points haul. As we look ahead to Gameweek 2, take a moment to appreciate Kings of a high scoring Gameweek 1. 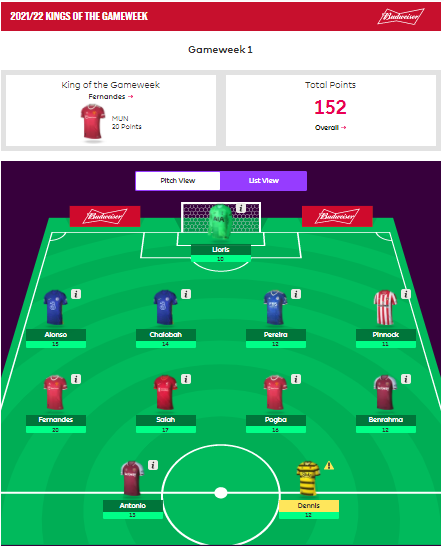 A home encounter with Leicester City gives Michail Antonio (£7.6m) the chance to retain his place as the top-scoring forward in Fantasy Premier League.

He will look to take advantage of a Leicester side who conceded 12 shots in the box in Gameweek 1, a total fewer than only two other sides.

Encouragingly for the Hammers, they won both their meetings against Brendan Rodgers’ men last term, scoring three goals on each occasion.

The Crystal Palace No 1 welcomes Brentford on the back of a strong home record against promoted sides last season. Guaita produced 20 points in those three matches, conceding only one goal.

A home meeting with Burnley lifts the Liverpool right-back’s prospects of starting the season with successive clean sheets. Alexander-Arnold’s role as the Reds’ main set-piece taker can also pose big problems for the Clarets.

Manchester United’s left-back is the third most-selected player in Fantasy, owned by over 54 per cent. Shaw can reward their faith with points at both ends of the pitch at Southampton.

The Brighton & Hove Albion centre-back offers strong value at home to Watford. Duffy’s four shots in the box in Gameweek 1 were more than any other defender in Fantasy.

Liverpool’s Egyptian opened the campaign with a 17-point haul against Norwich City. Salah was captained by a record-breaking 2.6million managers in Gameweek 1 and will again be a big favourite for the Reds’ first home match of 2021/22.

His hat-trick against Leeds United earned the Portuguese 20 points, his best-ever haul in Fantasy. Fernandes thrived in his last meeting with Southampton, producing a goal and two assists in a 9-0 victory.

An ownership of only 7.7 per cent makes the Manchester City winger a major differential for the captaincy against Norwich. Four of Mahrez’s five double-figure hauls last season came in home matches.

Leeds’ Brazilian was a big success in his meetings with this weekend’s visitors Everton last term. Raphinha scored and earned nine points in both his appearances against the Toffees.

His goal and assist at Newcastle have made the Algerian a top target for managers in Gameweek 2. Benrahma has earned 218,000+ transfers in for his home match against Leicester, making him the third most-bought midfielder in Fantasy.

An ownership of 27.7 per cent makes him the third most-owned forward in Fantasy.

The forward was on the scoresheet in Everton’s 3-1 comeback win over Southampton in Gameweek 1. Calvert-Lewin was a huge influence on the road last term, involved in a team-leading 60 per cent of the Toffees’ away goals when selected.

Luk at the Missing Blues Link – Can Romelu Bridge the Stamford Striking Gaps?