The English Premier League is finally here again, after a long wait necessitated by the international break, and FPL Managers can’t wait for the FPL GW4 party to get started.

What party you may ask? Its the Cristiano Ronaldo Party. This sentiment is reinforced by the FPL Scouts handing the Captain’s armband to the Manchester United Legend.

Before we disclose the Scouts Selection for GW4, let us take a moment to applaud the Kings of Gameweek 3. 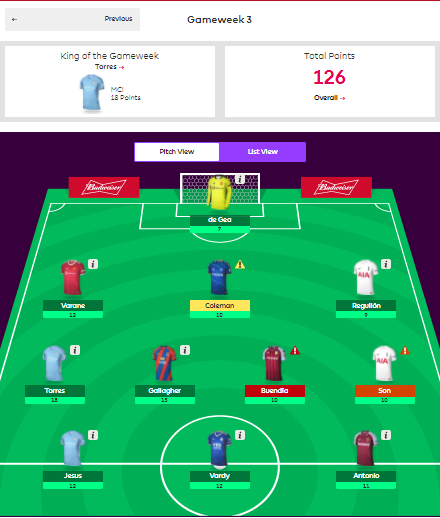 The Portuguese has scored in both his starts this season and is expected to be recalled to the first XI, with doubts over the fitness of Roberto Firmino (£8.8m).

Jota has been supplied with a team-leading three big chances in the opening three Gameweeks, while his four shots on target are just one behind Mohamed Salah (£12.5m).

Leeds, meanwhile, are still without a clean sheet this term, conceding eight goals in three matches.

Jota and Salah are joined by team-mate Trent Alexander-Arnold (£7.5m) in a Liverpool triple-up for Gameweek 4.

Salah earns the vice-captaincy, with Cristiano Ronaldo (£12.5m) handed the armband for the first match on his return to Manchester United.

Brentford’s No 1 has conceded just one goal in the first three Gameweeks. Raya can extend his early season form at home to Brighton & Hove Albion this weekend.

Everton‘s left-back offers strong all-round potential at home to Burnley. Digne’s delivery can exploit his visitors’ weakness in defending headed shots – his 23 crosses and six successful crosses are both more than twice any team-mate.

A home contest with promoted Norwich City boosts Arsenal’s clean sheet potential. Tierney has created seven chances from his role at left-back, more than double the total of any team-mate.

Six of Jota’s last seven goals for Liverpool have come in away matches.

Liverpool’s Egyptian scored a hat-trick and earned 20 points in his last start against Leeds. Salah’s totals of 13 shots, 11 shots in the penalty area and three big chances created are all among the top two players in Fantasy this season.

The Manchester City midfielder visits Leicester City on the back of two goals and an assist against Arsenal. Playing up front for the champions, Torres has returned hauls of 20 and 18 points in his last four starts.

The winger’s contribution could prove decisive for Watford at home to Wolverhampton Wanderers. Sarr’s eight shots and eight key passes are both team-leading totals.

More than 1.3 million managers have bought the Portuguese ahead of a home meeting with Newcastle United. Ronaldo scored 81 goals and supplied 16 assists in his three seasons in Serie A with previous club Juventus.

FPL’s top-scoring player has produced three successive double-digit returns ahead of a visit to Southampton. Antonio has totalled 40 points, thanks to four goals and four assists for West Ham United.

Naira stable at the parallel market as CBN goes after AbokiFX

Breaking: abokiFX suspends publication of rates on all platforms

Breaking: abokiFX suspends publication of rates on all platforms

Naira stable at the parallel market as CBN goes after AbokiFX