The concerns that the virus is spreading in Nigeria undetected abounds, as the country is not doing enough to test people for Covid-19.

Nigeria lags behind in terms of testing when compared to its counterparts. Lack of testing capacity implies that test, identify and trace method of controlling the virus which has worked in several countries will not be obtainable in Nigeria.

The efforts of many Nigerians in obeying lockdown rules, observing social distancing and maintaining personal hygiene is not being complemented by the government.

These control measures only work effectively when it is combined with adequate testing, trace and quarantine measures. However, it is obvious that the later is lacking in the country, thus the continuous increase in the number of confirmed cases as well as reports of mysterious deaths with unidentified causes in some parts of the country.

Thus, Nigeria remains the worst affected country in the region followed by Ghana.

Secretary General of the Federation, Boss Mustapha during the Covid-19 PTF briefing said that date has not been announced for reopening of schools across the country.

“The PTF wishes to inform Nigerians that the Federal Ministry of Education will roll out measures to be put in place for safe re-opening of our schools” he said.

Ten states with highest number of confirmed cases in  Nigeria are: 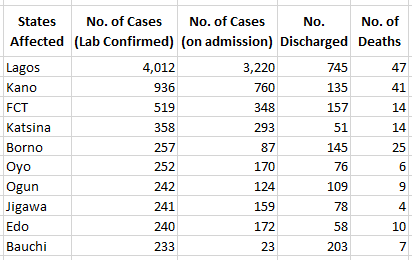 Northern Africa remains the region with largest confirmed cases and deaths. The region has recorded 36,420 cases, 15,810 recoveries and 1,676 deaths. It is followed by the West African region at 30,406 confirmed Covid-19 cases with 12,259 recoveries and 654 deaths.

In the U.S, 1 in 7 Americans know someone who have died of Covid-19 according to CNN. The country’s death toll has passed 100,000. Thus, becoming the first and only country in the world to record over one hundred thousand deaths from Covid-19.

First covid-19 related death was recorded in the country on 6 February. On average, 900 American die of the virus per day. Covid-19 has killed twice more people in the U.S than those who died in the Vietnam war.

80% of the deaths are people aged 65 and older according to CDC. 53% of them were in intensive care admission while 45% were hospitalized according to early march report.

Several states across the U.S are easing lockdown measures and returning economic activities. Experts have warned of possible second wave and resurgence of cases as the restriction are being eased. Hence urging that precautions should be maintained.

In Brazil, the number of new confirmed cases continues to jump on daily basis. The new cases in Brazil have surpassed the daily recorded new cases in the U.S.

In France, a study conducted on hospital staff in northeastern region with 160 volunteers found that almost all the doctors and nurses who got mild forms of Covid-19 produced antibodies that could prevent reinfection.

The study of 160 doctors and nurses who volunteered show that all but one developed antibodies within 15 days after the start of infection.

Almost all of the staff tested had antibodies that were capable of neutralizing the virus within 41 days of developing symptoms.

According to the study, more of the hospital staff developed neutralizing antibodies over time, with only 79% of the volunteers exhibiting them within 20 days, compared with 98% detected after 41 days. All of them had their infections confirmed by tests at the time they were ill.

The research addresses a crucial question regarding whether people who had Covid-19, and especially those who didn’t get severely ill, develop antibodies capable of protecting them against reinfection.

Although experts and Scientists have warned that the actual number of cases will be much higher due to large number of infections being asymptomatic, thus going undetected.

Do you have questions about Coronavirus? email us at info@investogist.com and we will get back to you with answer.

A Beginners Guide to Investing in the Nigerian Financial Market: Fixed Income Assets

A Beginners Guide to Investing in the Nigerian Financial Market: Fixed Income Assets