Among the top ten states with the largest number of confirmed cases in Nigeria, 7 states are in the North.

Below are top ten states with highest recorded number of covid-19 cases. 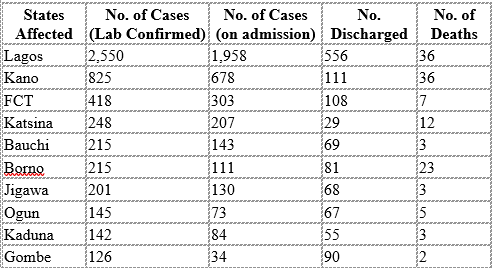 In Lagos state, after conducting a vote via its twitter handle to seek public opinion on whether Lagos state will go into another lockdown, the governor seems to be going contrary to the result of the votes,  as it  considers full re-opening of economy, and embarks on assessment of readiness of businesses.

The Governor of the state Babajide Sanwo-olu, made this known on Sunday, at a briefing after the State’s Security Council meeting held at the State House in Marina.

“We are at a level where we are reviewing the other arms of the economy. In the coming days, we will be starting what we call Register-to-Open, which means all players in the restaurant business, event centres, entertainment, malls and cinemas will go through a form of re-registration and space management.

“There is a regulation that will be introduced to supervise this move. We will be coming to their facilities to assess their level of readiness for a future opening. I don’t know when that opening will happen in the weeks ahead, but we want these businesses to begin to tune themselves to the reality of COVID-19 with respect to how their workspaces need to look like” he said.

“We are reviewing and considering how the phased unlocking will happen. If we see huge level of compliance, then it can happen in the next two to three weeks. If not, it could take a month or two months. It is until we are sure all of these players are ready to conform to our guidelines,” the Governor asserted

Akwa Ibom State has rejected 10 vehicles donated to the state by Exon Mobil as aid for the fight against Covid-19. This was made known in statement issued by the Information Commissioner. The vehicle donation was aimed at helping the state to conduct easy contact tracing.

However, the state accepted 20 hospital beds and 2 ambulances donated by the oil giant.

According to the statement issued on Sunday by Charles Udoh, the state’s Information Commissioner, the state government thanked Exxon Mobil for the donation.

Although it said that after thorough examination of the vehicles, it found that they were not capable of going through the pressure of contact tracing because they “were too old”. Hence, there was no need to accept them. According to Udoh, this decision was made at the meeting of the State’s  Covid-19 Committee

“The vehicles are considered too old and not in good enough operational conditions to withstand the rigour of contact tracing which they were meant to serve” he said.

Nigeria remains the country with highest number Covid-19 deaths at 182 in West Africa. It is followed by Mali with 52 deaths from Covid-19.

In Madagascar, the first death of Covid-19 was announced on Sunday, by the country’s National Covid-19 Taskforce.

The death of a 57-year-old man, a medical worker with underlying health conditions of diabetes and high blood pressure on Saturday night, was announced by Hanta Danielle Vololontiana, the Taskforce spokeswoman.

The country has confirmed 304 cases of Covid-19, with 114 recoveries and 1 death recorded.

Within a month Brazil has seen two health ministers leave the job after criticizing President Jair Bolsonaro on his actions with respect to Covid-19.

Top five countries with highest number of confirmed Covid-19 cases are the U.S, Russia, United Kingdom, Brazil and Spain. These five countries account for over 52% of the worlds total confirmed cases and 54% of total deaths according John Hopkins tally.

FOREX Forecast for the Week 18th May to 22nd May