Coronavirus Update – 70% of the 284 new cases in Nigeria Recorded in Lagos State.

Cases of confirmed Covid-19 continue to rise in Nigeria as the Nigeria Center for Disease Control (NCDC) reported 284 new cases on Wednesday across 12 states and FCT.

70% of the new cases were confirmed in Lagos State while the confirmed cases in River State rose by 49% to 79 from 53.

Nigeria remains the country with the highest number of confirmed cases and deaths in West Africa.

Ten states with largest number of confirmed Covid-19 cases in Nigeria are: 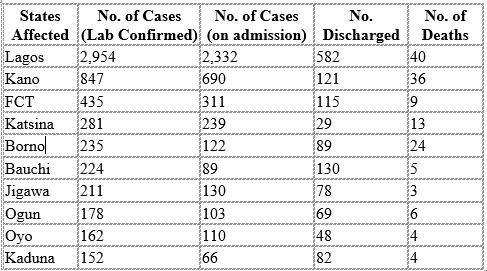 In Cameroon, President Paul Biya has addressed the nation in a TV broadcast, for the first time since 6 March 2020 when Covid-19 spread to the country, beating the two weeks interval address by the Nigerian President, which has been criticized by the public. Paul Biya has been the country’s president since 1982.

Cameroun, which share a border with Nigeria is the worst affected country in Central African region. The country has recorded 3,529 cases of Covid-19, with 1,567 recoveries and 140 deaths.

The World Health Organization (WHO) has reported 106,000 new cases of Covid-19 in 24 hours. This is the highest number of new cases it has recorded in 24 hours since the outbreak began.

The WHO Director General Tedros Adhanom Ghebreyesus said that two-third of the new cases were recorded in just four countries: the U.S, Russia, Brazil and Saudi Arabia. He also warned that the world still has a long way to go in combating the outbreak.

In Italy, the first democratic country to impose a lockdown and once the epicenter of the virus outbreak, the government has planned to lift quarantine measures in 2 weeks, and open the country to tourists in a bid to revive the economy.

This figure puts the recovery and death rate in Italy at 58.2% and 14.2% respectively. However, the high death rate is due to the country’s high population of elderly people.

In South Korea, A new research by the country’s Center for Disease Control and Prevention has found that Covid-19 patients who test positive after recovery are not infectious and could have the antibodies that prevent them from falling sick again.

The study which involved 285 survivors of Covid-19 who had tested positive for the virus after recovery, offers a sign of hope, that life can return to normal after Covid-19 pandemic. The result of the research shows that without social distance measures, those who have recovered from the virus does not present the risk of infecting other people.

South Korea, once the virus hot spot has largely brought the spread under control. The country has recorded 11,110 cases of Covid-19, out of which 10,066 have recovered and 263 deaths reported.

In Brazil, the country’s president Jair Bolsonaro has authorized the use of a malaria drug, Hydroxychloroquine for the treatment of Covid-19 in the country, including patients with mild symptoms. This announcement came two days after President  Trump said that he is taking the drug despite not testing positive for virus. Covid-19 currently do not have any vaccine or approved drug for treatment.

Covid-19 cases have continued to rise in Brazil. It is the third country with largest confirmed Covid-19 cases behind U.S and Russia. Total of 271,628 cases of Covid-19 have been confirmed in the country, with 106,794 recoveries and 17,971 deaths.

In China where the outbreak began in 2019, a new cluster of Covid-19 cases has emerged in the Northeast Region of the country. Some 46 cases have been reported over the past two weeks spread across three cities: Shulan, Jilin city and Shengyang, in two provinces, a resurgence of infection that have triggered a new lockdown measures in the region of about 100 million people.

Qiu Haibo, one of China’s top critical care doctors, told state television on Tuesday, that patients in the northeast appear to be taking longer than the one to two weeks observed in Wuhan to develop symptoms after infection, which suggests that the virus might be mutating.

Qiu also said that doctors have noticed patients in the northeast cluster seem to have damage mostly in their lungs, whereas patients in Wuhan suffered multi-organ damage across the heart, kidney and gut.

The northeast provinces have ordered a return of lockdown measures, halting train services, closing schools and sealing off residential compounds, all these happening when the residents  thought the worst was over.

Read also; Building a Business based on Local content-Lessons for a would-be Entrepreneur

Wu Anhua, a senior infectious disease doctor, said on state television on Tuesday “People should not assume the peak has passed or let down their guard, It’s totally possible that the epidemic will last for a long time.”

China reported 84,063 cases of Covid-19 with 79,310 recoveries and 4,638 deaths. Though actual number of infection and deaths are thought to higher than the Chinese authorities reported. The country has been criticized for it’s handling of the virus outbreak.