Coronavirus Update – Nigeria vs Other Countries in Terms of Testing; 452 new cases recorded in Nigeria.

Lagos state still hold the largest number of confirmed cases and deaths in the country. 42.4% (9,073) of the cases are confirmed in the state.

According to the data on NCDC website, total of 117,569 samples have been tested for Covid-19 in the country since the beginning of the outbreak.

In the fight against the spread of Covid-19, the importance of testing cannot be overemphasized. Nigeria is lagging behind on testing.

The number of tests conducted per day in a country helps to identify, isolate and treat Covid-19 patients as well initiating contact tracing and quarantining process, which will prevent further spread.

Since asymptomatic persons can transmit the virus, and higher percentage of those infected with Covid-19 are asymptomatic (persons who are infected but do not exhibit symptoms or become sick), massive testing of the population is the only way to detect asymptomatic carriers and isolate them, thereby preventing further spread and protecting the vulnerable.

The inability to detect asymptomatic individuals with Covid-19 leads to wider spread of the virus and make control more difficult.

74% of confirmed cases in Nigeria have unknown exposure according to the 22 June situation report by NCDC.

The Director-General of the Nigeria Center for Disease Control (NCDC), Dr. Chikwe Ihekweazu, on 15 June during the Presidential Task Force on COVID-19 press briefing in Abuja, warned that there are more coronavirus cases in Nigeria than being reported.

It has been a thing of concern that Nigeria with a population of over 200 million people,  just barely over 117,000 samples have been tested for Covid-19.

In adequacy of testing can also attributed to the reason why people are dying of unkown causes in the country in the recent times, such as the mysterious deaths in Kano which was later confirmed to be linked to Covid-19, Bonny Island which has now been placed under lockdwon due to Covid-19, Jos and so on.

The number of tests in Nigeria is a joke compared to the tests done in other countries including some African countries like South Africa where over 1.3 million tests have been carried out in a population of 59.3 million people..

United States have done the most tests, with over 27.5 million. It is followed by Russia and India with more than  17.5 million and 7.1 million tests respectively.

Nigeria need to massively increase its testing capacity across all states in the country.

The Number of tests done across 35 countries in May and June with their population is shown in the table below.. 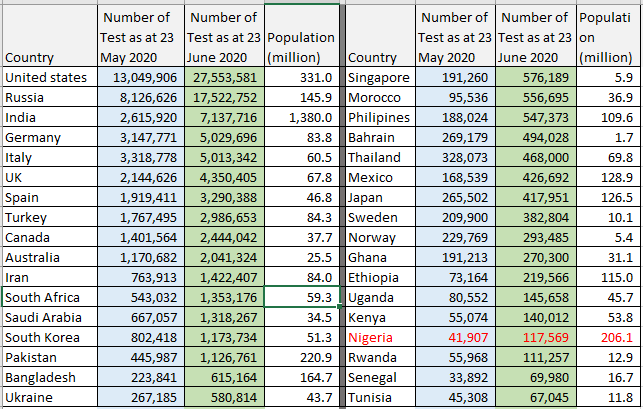 Source: Our World in Data

In Imo state, at least 13 members of the Imo State House of Assembly have tested positive for COVID-19.

This was disclosed on Tuesday, by the Spokesperson for Imo State COVID-19 Task Force, Chimezie Iwuala, in Owerri, on Tuesday.

He said the affected lawmakers have been given instructions to self isolate. Imo state Assembly complex was locked down last week on the order of the Speaker, Collins Chiji after a lawmaker tested positive for the virus.

World number one Novak Djokovic on Tuesday said he and his wife have tested positive for Covid-19 while the children were negative.

Djokovic is the fourth player to contract the virus after taking part in his exhibition tennis tournament in the Balkans.

Read further; The Presidency declines to say whether China will take Possession of Assets in the Event of Default

Total of 316,079 cases have been confirmed in Africa, with 150,377 recoveries and 8,339 deaths according to Africa Centre for Disease Control and Prevention. Thus recovery rate and death rate in the continent is 47.58% and 2.64% respectively.