As the Nigerian Stock Exchange (The NSE) summarized the week in its weekly report, “It was a historic trading week as the NSE All Share Index (ASI) posted its largest daily gain in more than five years on Thursday, 12 November 2020”.

The ASI rose beyond the set threshold of 5% triggering a 30 minute trading halt of all stocks for the first time since the Circuit Breaker was introduced in 2016.

The market index continues its rise after trading resumed on Thursday, to close at 35,342.46 points, recording a gain of 6.23%, and adding over N1.1 trillion to the Market Capitalization.

Thursday’s record breaking session was followed by a negative performance on Friday, probably due to Investors taking profit from the weeks phenomenal gains. The NSE All Share Index declined by 0.86% (305 points) on Friday to close at 35,037.46 points.

Overall, it was an impressive week for the Nigerian Stock Market, All Share Index rose by 4,021.29 points while the Market Capitalization increased by N2.101 trillion, representing a gain of 12.97%.

The Financial Services industry (measured by volume) led the activity chart with 3.073 billion shares valued at N35.408 billion traded in 25,894 deals; thus contributing 68.15% and 60.29% to the total equity turnover volume and value respectively.

The Investogist activity chart shows that The NSE saw its second and third days with highest volume and value of stocks in the year so far.

The highest number of deals ever recorded this year was recorded in the week in review as well.

At the end of trading on Friday, 13th November, the NSE ASI is up by 30.53%, YTD. The YTD Performances of the 5 indices under our watch are as below.

In the week in review, all of the 5 indices under our watch appreciated;

Sixty-nine (69) equities appreciated in price during the week, higher than Forty (40) equities in the previous week.

Top gainers and losers in the week, as reported by The NSE in its weekly report is as below; 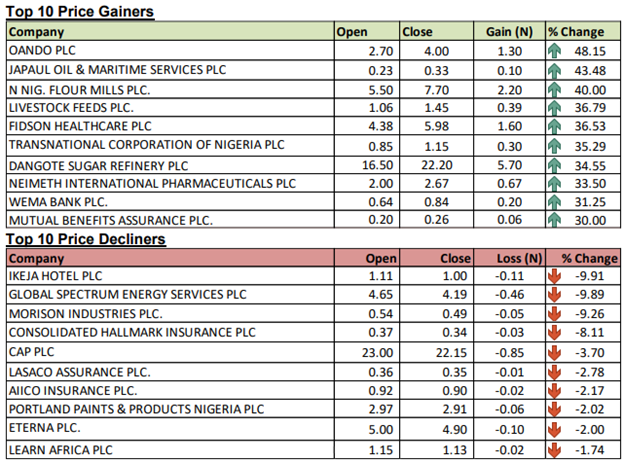 5 companies released financial statements in the week, while the share price of Airtel Africa plc was adjusted on Friday from N451.20 last close price to N445.41 to account for the N5.76 dividend whose qualification was the previous.

We expect further profit taking in the coming week, but anticipate the market positive trajectory to continue, albeit at a slower pace than seem in the week in review.

Vacancies at the IMF, women from Sub-Saharan Africa are encouraged to apply

Vacancies at the IMF, women from Sub-Saharan Africa are encouraged to apply

How are Financial Statements Prepared? Establishment/Preparation of a Company