In the week that saw the CBN’s Monetary Policy Committee (MPC) reduce Monetary Policy Rate (MPR) to 11.5%, the Nigerian Stock Exchange (NSE) posted its highest weekly gains in September. This was a result of the benchmark NSE All-Share Index advancing in each of the trading day in the week.

The Financial Services industry (measured by volume) led the activity chart with 1.178 billion shares valued at N9.180 billion traded in 9,900 deals. It contributed 75.14% and 44.65% to the total equity turnover volume and value respectively.

Other than the volume and value of traded stocks increasing, the number of deals done in the week also increased by 7.52%.

At the end of trading on Friday, 25th September, the NSE ASI was down by 1.95% YTD. The YTD Performances of the 5 indices under our watch are as below.

All the indices under our watch appreciated in the week; 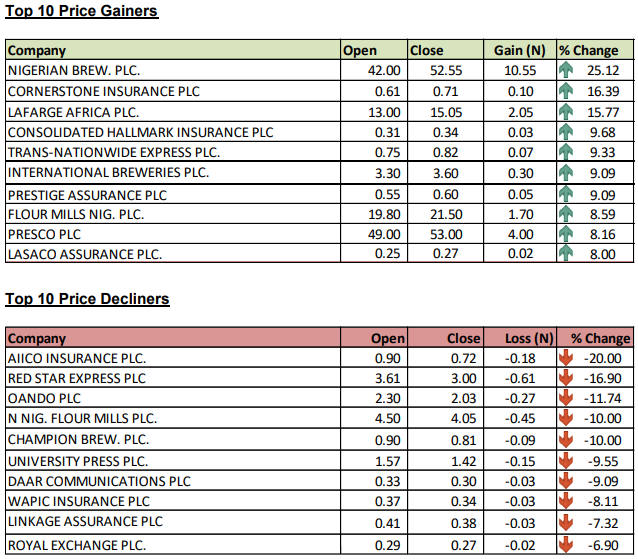 The price of three stocks saw an adjustment in the week for dividends and bonus. First was REDSTAREX, then AIICO and and lastly UPL.  As a result of the adjustment, the stocks started trading at lower prices.

On Thursday 24 September, the share price of AIICO Insurance Plc saw an adjustment for 1 for 5 bonus share, from N0.86 to N0.72.

While on Friday 25 September, the share price of University Press Plc was reduced by N0.15 dividend from N1.57 to N1.42.

The market enjoyed a good run in the preceding week, for that reason we expect profit taking to take center stage in the coming week.

Furthermore, there is an impending strike action by the Nigerian Labour Congress (NLC) and Trade Union Congress (TUC) in the coming week. Ultimately, this will be on the mind of market participants, possibly reflecting negatively in the market.

In conclusion, we anticipate a decline in the market index in the week.

Suspended strike – What NLC and TUC agreed with the Federal Government

Suspended strike - What NLC and TUC agreed with the Federal Government