The five South Eastern states; Ebonyi, Imo, Enugu, Abia and Anambra accounts for just 2.44% (1,723) of the tests while only 9 and 3 samples have been tested in Cross River and Kogi state respectively.

Details of the Tests are shown in the last column of the table below. 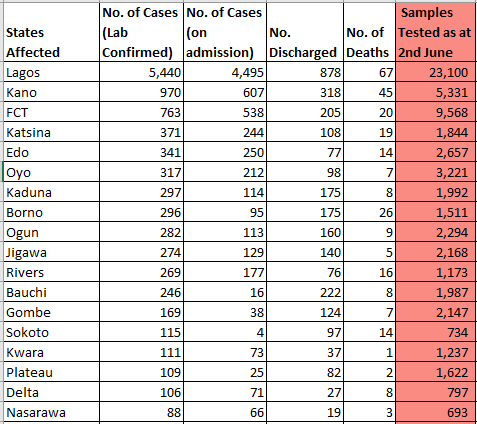 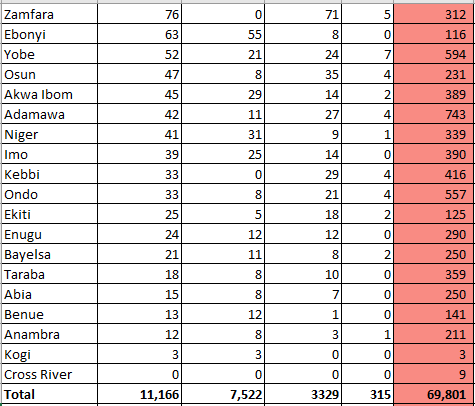 According to NCDC in its 2 June situation report “NCDC has deployed over 440 people to support 34 states and the FCT through our Rapid Response Teams (RRTs) and trained over 13,000 healthcare workers on Infection, Prevention and Control across the Federation.”

“These include technicians, ad-hoc staff such as sample collectors, contact tracers and cleaners at the health care facilities.”

“812 healthcare workers have been infected in the course of the response, including 29 NCDC staff”

440 people deployed by NCDC to support 34 states equates to 13 persons per state. This number seems to be very small and it is hard to see Its effectiveness.

In River State, following the reports of deaths in Bonny Island, 2 cases of Covid-19 were confirmed in the Island on 30 May. This was contained in a press release, signed by the Executive Chairman, Bonny LGA, Hon. Engr. David Rogers Irimagha on 30 May 2020.

He urged the residents to go about their businesses with care and caution, while abiding by all government regulations just like every other Nigerian guarding against the virus.

However, a resident of the island on Wednesday, told Investogist on the condition anonymity that, “in Bonny Island in Rivers State, they live community life there and at least 3 to 5 persons die everyday. People now switched to herbal remedies because their body resist the regular typhoid and malaria treatment.”

“We don’t know what they die of, but people who mostly die have preconditions. They die when they get sick of same symptoms”

“They are sick and test positive to typhoid, malaria, pneumonia, and symptoms include fever, loss of smell and taste, cold. And in some cases breathing deficiency.”

“my advice to people is, don’t take things for granted, protect yourself and practice good personal hygiene and maintain social distancing, use your face mask.”

“A lot of people will refuse to use face mask in public places. We lost two close colleagues yesterday, aside the people I don’t know”

Listening to these accounts from a resident in the Island is disheartening, especially knowing that only 1,173 samples have been tested for Covid-19 in the entire Rivers State since the outbreak began as at 2 June 2020.

From the statements of this resident, loss of taste and smell, and breathing difficulty are the symptoms of Covid-19. In addition, mostly those who have “preconditions die”, these group of people have been shown to have high risk of death from the Covid-19.

Thus, it is imperative that massive testing is carried out in the island to ascertain the extend of the spread since cases have been identified there.

Nigeria remains the country with the largest number of confirmed case and deaths in West African Region. 74% of the confirmed cases in Nigeria has unknown exposure according to NCDC. This suggests that, there is high level of community transmission in the country.

In Sierra Leone, The International Monetary Fund (IMF) board today approved $143 million to help Sierra Leone meet critical health needs and address the socio-economic impact of Covid-19 in the country.

In Latin America, cases of Covid-19 is rising in Brazil, Mexico, Peru, Chile and Ecuador.

In Europe, lockdown restrictions are being eased as the spread of the virus has slowed in recent times. The UK, Italy, Spain, France, Germany along with others, now appear to have passed the peak, with the number of new confirmed cases and deaths falling. 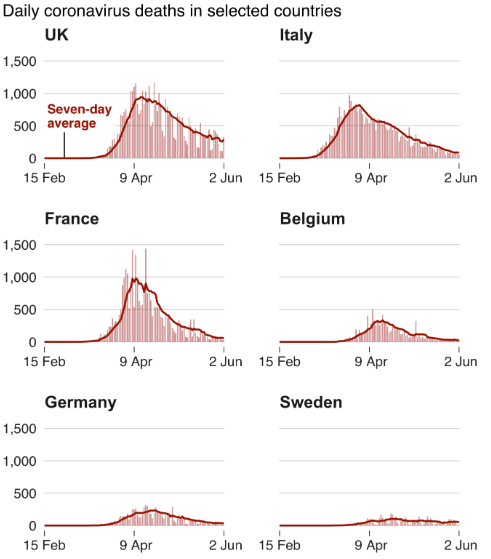 In the U.S, the rate of new cases is now declining in many states, while in others – including California, and several south-eastern states – it is still rising.

At one point, more than 90% of the U.S population was under mandatory lockdown orders, but all 50 states have now begun to loosen their stay-at-home restrictions and allowed some businesses to reopen – a move health officials fear could further spread the virus.

And mass protests against police brutality following the death of George Floyd have led to warnings from public health experts that crowds gathering could cause a further resurgence. 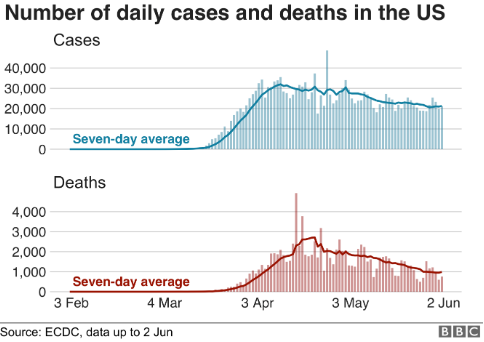 INEC announces date for collection of PVCs across the country