The market experienced massive sell-offs on Thursday, while high cap Dangote Cement Plc shares suffered a market impacting 8.04% decline on Friday; these two events were the reason for the high level of loses on these two days.

The Financial Services industry (measured by volume) led the activity chart with 1.884 billion shares valued at N14.933 billion traded in 13,602 deals; thus contributing 83.15% and 71.14% to the total equity turnover volume and value respectively.

The activity level taken in total for the week was mixed, as the volume of shares traded increased by 35.19% over that recorded last week, while the value of shares traded decreased by 17.44%. The Investogist Activity chart shown below, indicate a moderation of the market activities towards what was seen prior to the market rally that started with the commencement of the forth quarter.

As at the end of trading on Friday, 11th December, the NSE ASI was up by 27.60% YTD. The performances of the 5 indices under our watch so far this year are presented below;

In the week ending 11th December, 2020, all the 5 indices under our watch declined;

Top gainers and losers in the week as reported by The NSE in its weekly report is as below; 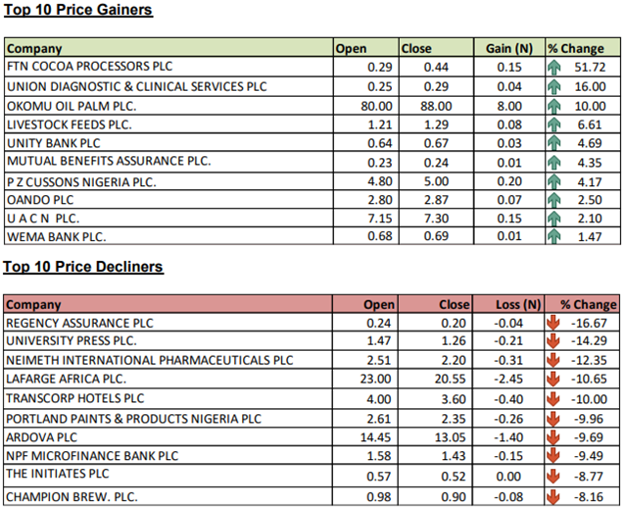 Niger Insurance Plc released its 1st, 2nd and 3rd quarter 2020 financial statements to the Nigerian Stock Exchange, subsequently the suspension on trading of its shares was lifted.

We expect the weak activity level to continue, with the benchmark index direction being influenced heavily by high cap stocks.