The first week of trading on the Nigerian Stock Exchange started on a positive footing on Monday, endured a decline on Tuesday, then recorded mild gains on Wednesday and Thursday, and ended the week on loses due to decline in the prices of the two most capitalized companies on The Exchange.

Buoyed by +9.9% gain in the price of BUA Cement shares, supported by GUARANTY and WAPCO, the benchmark All-Share Index (NSE ASI) advanced 2.2% on Monday. BUA Cement share prices reversed course on Tuesday, shading 5.9%, dragging down the index with it in the process. MTNN (-2.8%) and Zenith Bank (-4.3%) shares’ decline also contributed to the 1.8% loss recorded on Tuesday.

Any hopes of a positive close for the first week of trading in 2021 was snuffed out by Dangote Cement Plc and MTNN. The two market heavy weights lost 8.1% and 2.8% respectively, causing the NSE ASI to shade 1.16% on the weeks’ last day of trading.

The Consumer Goods Industry (measured by volume) led the activity chart with 2.026 billion shares valued at N7.503 billion traded in 4,031 deals; thus contributing 59.70% and 37.77% to the total equity turnover volume and value respectively.

In the week ending 8th January, 2020, the Oil & Gas Index and Insurance Index were the top performers, while the Industrial Goods Index was the only index under our watch that declined. 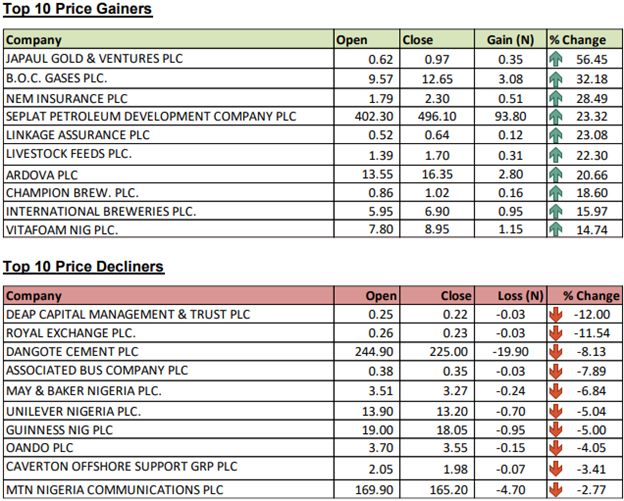 We expect bargain hunting to drive performance in the coming week as Investors’ position for dividends.