The second week of trading in February has ended with the benchmark Nigerian Stock Exchange All-Share Index closing in negative territory, a repeat of its performance in the preceding week. In fact, out of the 10 trading sessions so far in this month of February, only one recorded a positive close.

On Thursday, the Debt Management Office on behalf of the Federal Government offered a total of N150 billion FGN bonds for subscription by auction. The bonds are offered at different interest rates and tenors. This bond offering  had a 16.288% yield on the FGN MAR 2027, which had the ability to influence what was happening in the local burse, and it did.

The week in review started on Monday, 8th February, with a 0.34% drop in the NSE ASI as shares of Guaranty Trust Bank Plc and PZ declined by 8.8% and 9.7% respectively.

The market performance worsened on Wednesday, as the NSE-ASI declined by 1.96%. The most capitalized stock on the market; DANGCEM spearheaded the performance with a 7.4% decrease of its share price.

The Financial Services Industry (measured by volume) led the activity chart with 2.032 billion shares valued at N13.416 billion traded in 14,832 deals; thus contributing 75.74% and 56.70% to the total equity turnover volume and value respectively.

In the week ending 12th February, 2020, below are the performances of the indices under our watch; 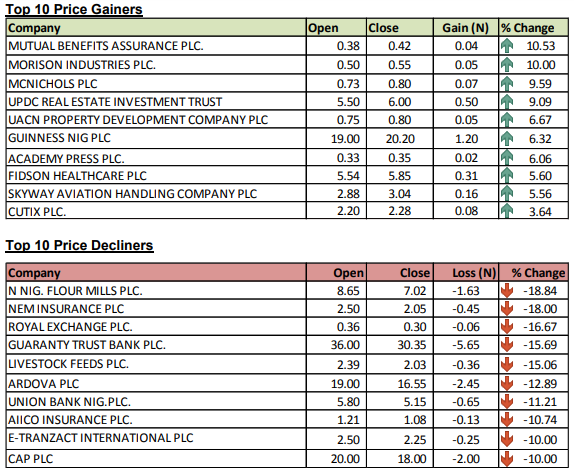 We expect bargain hunting and realignment of portfolios to drive performance in the coming week as Investors’ position for dividends and react to the improved offering in the fixed income market.