On paper, the benchmark index of the Nigerian Stock Exchange (NSE); the All-Share Index (NSE ASI) closed the week 0.08% lower than it started it, but in reality the market index would have advanced were it not for the price adjustments for the major tier 1 bank’s interim dividends.

On Wednesday, 16 September, the share prices of 3 banks were adjusted to account of their interim dividends. GUARANTY was adjusted to N24.85, from its last closing price of N25.15 for the 30 kobo interim dividend declared by the bank for the half year period ended 30 June, 2020.

On Friday, 18 September, ACCESS had its share price adjustment from N6.60 to N6.35, in view of the 25 kobo interim dividend declared by the board for the half year period ended 30 June, 2020.

The market capitalization rose by 0.10% in the week as N13.609 billion was added to it, to bring it up to N13.364 trillion as at the end of trading on Friday. The opposite direction of the market capitalization to that of the market index was because of the admission of 601,030,210 ordinary shares of Stanbic IBTC Holdings Plc to trade at the NSE on Wednesday, 16 September 2020.

The Financial Services industry (measured by volume) led the activity chart with 870.300 million shares valued at N7.863 billion traded in 9,427 deals; thus contributing 76.43% and 61.95% to the total equity turnover volume and value respectively.

The activity chart remained as it was coming into the week, neither volume nor value of shares traded showing an indication of movement in any direction. 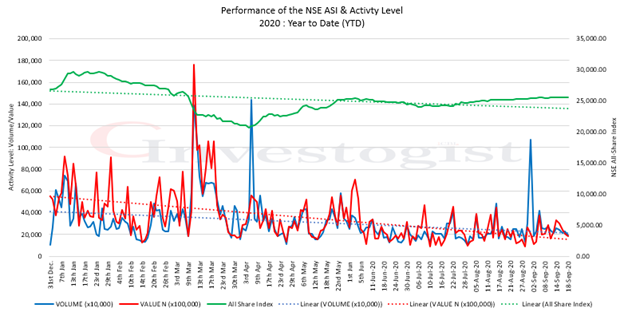 At the end of trading on Friday, 18th September, the NSE ASI was down by 4.73%. The YTD Performances of the 5 indices under our watch are;

3 out of the 5 indices closed the week in positive territory, while 2 declined. The Industrial Goods Index advanced by 0.50%, the Consumer Goods Index increased by 0.13%, while 0.01% was recorded by the Insurance Index. 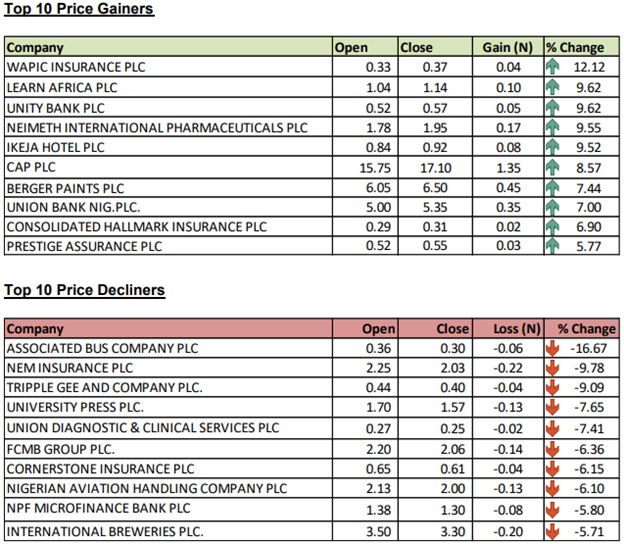 With no major market mover on the horizon, bargain hunting and profit taking will dominate market activity in the coming week.

TRANSCORP is our only stock to watch in the week ahead, as the Board of Directors meet on Tuesday to consider what the company termed “price sensitive” issues.