Following a 50% decrease in profit after tax, the board of directors has recommended a dividend of 5kobo per ordinary share. This will undoubtedly be a disappointment for shareholders and investors, given that the publisher has always paid double digit dividends in the past (except for 2016 when there was no dividend).

The financial statements were released in after trading hours, the market response will undoubtedly be known in Monday’s trading session.

Analysis of the report: Income Statement

The combined effect of the drop in other operating income, and an increase in the administrative expenses, eroded the gains made by a reduction in the cost of sales. While other operating income decreased from N338.587 million in 2019 to N159.599 million in 2020, the administrative expenses increased by 19.58% from N880.335 million to N1.052 billion.

Analysis of the report: Statement of Financial Position

Analysis of the report: Statement of Cash Flows

The cash flow statement shows that the company was running a negative cash flow from its operating activities. The cash used in the various business activities are as following; 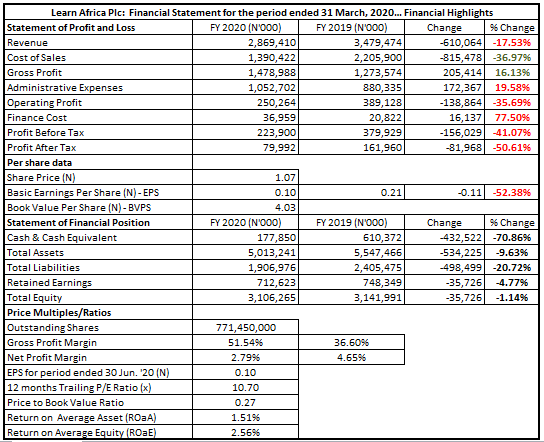 Learn Africa Plc is a leading learning resource business in Nigeria, with a history spanning over 50 years. The company was established in 1961 as Longman Nigeria – a book publishing firm wholly owned by Longman Group UK Limited, now Pearson Education.

On July 23, 1996, the shares of Longman Nigeria Plc were listed on the Nigerian Stock Exchange. In 2008, the company became a subsidiary of Pearson Plc following the latter’s increase in its shareholding from 29 to 51 percent.

In 2011, however, Pearson and Longman Nigeria mutually agreed to become separate corporate entities in Nigeria. The main business of Learn Africa Plc is the publication and marketing of textbooks for the entire gamut of the educational system – nursery, primary, secondary and tertiary.

The registered office is located at 52, Oba Akran Avenue, Ikeja, Lagos in Nigeria.

The shares of LEARNAFRCA closed at N1.07 in the last trading session on Friday, 5.31% lower than its opening price this year. Over the last five years, the stock is gaining 17.58%, and gaining 38.96% over the past three years. 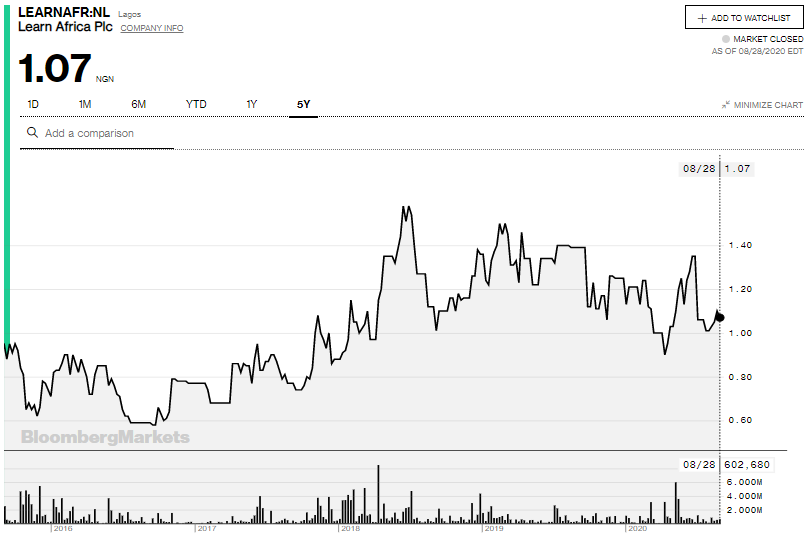 We will be taking a position on the stock in our weekly stock pick.