Nigeria recorded the highest daily confirmed cases of Covid-19 on Saturday. The number of new infections in the country continue to rise with 779 new cases recorded on Saturday across 21 states and FCT.

The number of samples tested in Nigeria for Covid-19 continue to be inadequate when compared to the population size of the country and the high level of community transmission.  Total of 127,158 samples have been tested in the country since the outbreak began according to NCDC.

Ten states with the largest number of confirmed cases according to NCDC are; 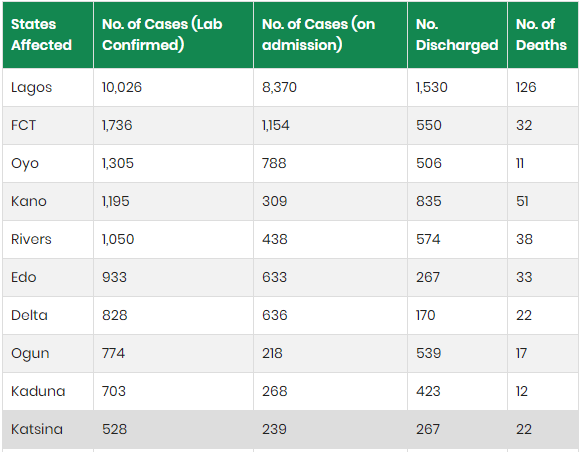 Peter Okoye (Peter Psquare) has revealed via his twitter handle on Saturday, that him and his family (wife and daughter) as well as two of his domestic staff tested positive for Covid-19 and have recovered from the virus.

He asked people not to take the Covid-19 for granted and observe safety measures to protect themselves and their loved ones.

Peter said “I had COVID19 for about three weeks and it happened to me. I was sick and I tested positive. After a week, my daughter caught the virus as well.”

“I was sick and I was being self-isolated in my guest room. I couldn’t even see my sick daughter and I was feeling so bad. I felt so bad because I felt that I am the one who actually brought the virus to the house. It was so bad that I had to be calling her on video, checking on her.

“I just want to tell everybody that this COVID19 is real. Don’t take it for granted.

He concluded by saying “I am happy to announce that my wife, myself, our daughter, and two of our domestic staff, all of us are now negative.”

In Lagos State, seven private laboratories has been authorized as COVID-19 testing centres. This was announced on Friday by Prof. Akin Abayomi, the State Commissioner for Health during a briefing in Alausa.

According to the commissioner, the decision was made to increase Covid-19 testing in the state.

He said. “the testing facilities as we’ve established at the moment, are the Lagos University Teaching Hospital, the Lagos State Biobank, Nigerian Institute of Medical Research, and the Central Public Health Laboratory in Yaba.

The Federal Airports Authority of Nigeria (FAAN) is making plans to deploy robots in the airports all over the country as it plans to resume flight operation.

The use of the robots will include passenger profiling, check-ins, temperature checks as well as detection of security threats including dangerous goods and arms according to Punch.

General Manager, Corporate Affairs, Henrietta Yakubu told Punch “that the test run of the robots was done at the Lagos Airport on Saturday.

“It’s a demo that is going on in Lagos. It’s been demonstrated. If it works fine, it will be adopted,” she said

In Ethiopia, a man said to be 114 years old, Aba Tilahun Woldemichael has recovered from Covid-19. His doctors said that his recovery is “incredible.” He is said to 114 years by his family members.

People who are more than 80 years of age are considered to be among the most vulnerable to the virus.

“When I was in the hospital I was praying to God asking for my health. I was crying and praying for the whole country to be healthy again,” he said.

Aba Tilahun tested positive for the virus when a random screening process took place in his neighbourhood in the capital, Addis Ababa, and was admitted to hospital before the symptoms showed.

He received oxygen and dexamethasone, a cheap and widely available steroid that researchers in England have said reduced deaths by up to one third in severely ill hospitalised patients.

Ethiopia’s health minister has said the ministry recommends the emergency use of the drug for Covid-19 patients who require ventilation or oxygen.

Total of 360,427 cases have been confirmed in Africa, with 173,267 recoveries and 9,291 deaths according Africa Centre for Disease Control and Prevention.

In Spain, the ban on cruise liners from docking at its ports, which was placed when the country went into lockdown on 14 March, is to continue until Covid-19 pandemic is brought under control.

This was disclosed in a ministerial order published on Saturday. According to the Official State Gazette, the ban will remain in place even as the country reopens to tourists in an effort to revive an industry hammered by the coronavirus lockdown.

Cruise liners carrying thousands of passengers regularly stop off at ports in the Balearic Islands, the Canary Islands, Barcelona and Malaga.

Read also; 2014 Immigration Job Scandal: Moro and others have Case to answer – Court

Florida, Arizona and Nevada recorded daily highs for coronavirus infections on Saturday, highlighting the worsening spread of the virus in several southern and western states.

The U.S has the highest number of confirmed Covid-19 cases, deaths, recoveries and number of tests conducted in the world.

In Serbia, top government officials have been reported to have tested positive for Covid-19.

The National Assembly Speaker, Maja Gojković, the defense minister Aleksandar Vulin and the head of government office for Kosovo and Metohija, Marko Đurić, have tested positive for Covid-19 according to media reports.

The report from European Western Balkans said all of them were present at the crowded victory celebration of the ruling Serbian Progressive Party (SNS) following the election on Sunday, 21 June.

The data used is according to John Hopkins Coronavirus Resource Centre except otherwise stated.

Nigerians spend over 3:30 hours daily on social media – Second highest in the world

How much is the Business worth: The Income Statement

How much is the Business worth: The Income Statement