Between March 2020 and April 2020, UK GDP fail by 20.4%, equivalent to a fall of approximately £30 billion in Gross Value Added. This is the largest monthly decline in GDP since monthly record began in 1997 according to the report from UK Office for National Statistics seen by Investogist.

UK economy has experienced a significant shock since the start of the Covid-19 pandemic, GDP has fallen dramatically, with record broad-based falls in output for production, services and construction. 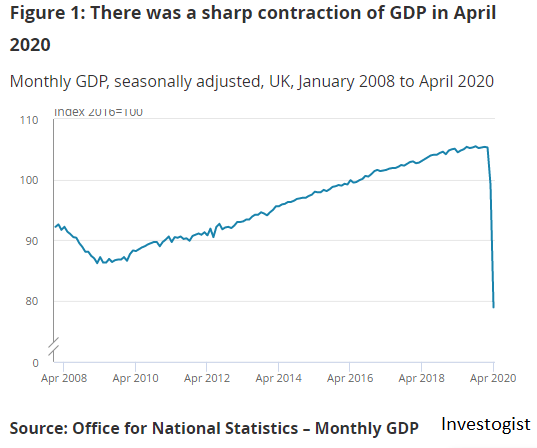 The monthly decline in GDP in April 2020 is three times greater than the fall experienced during the 2008 to 2009 economic downturn. During the global financial crisis, from the peak in February 2008 to the lowest point of March 2009, a total of 13 months, GDP contracted by 6.9%.

April 2020 has experienced sharper falls than March as the negative impacts of social distancing and “lockdown” have led to a significant fall in consumer demand and business and factory closures, as well as supply chain disruption

Monthly analysis of businesses show that COVID-19 had a significant and wide-ranging negative impact on output during April 2020.

75% or more of the businesses in sports activities, amusement and recreation activities, accommodation, food and beverage service activities, libraries, archives, museums and other cultural activities and creative, arts and entertainment activities said they had temporarily closed or paused trading in April.

The construction industry experienced a strong decline in output of -40.1% during April 2020. This is the largest fall since monthly records began in January 2010. Largely due to suspension of construction projects.

The services industries were most impacted by social distancing, for example, travel and tour operators, accommodation and food and beverage services.

The worst affected service industry is the Air Transport which declined by -92.8%. it is followed by Travel Agency, Tour Operator and other Reservation Service And Related Activities which decline -89.2% while Food and Beverage Service Activities fell by 88.5%.

Wholesale and Retail Trade and Repair of Motor Vehicles and Motorcycles industry declined by -87.3% while Accommodation dropped -86.9%.

Prime Minister Boris Johnson said he was “not surprised” by the figures. “We’ve always been in no doubt this was going to be a very serious public health crisis but also have big, big economic knock-on effects.”

“The UK is heavily dependent on services, we’re a dynamic creative economy, we depend so much on human contact. We have been very badly hit by this.”

Chancellor Rishi Sunak said: “In line with many other economies around the world, coronavirus is having a severe impact on our economy.”

“The lifelines we’ve provided with our furlough scheme, grants, loans and tax cuts have protected thousands of businesses and millions of jobs – giving us the best chance of recovering quickly as the economy reopens.”

The chancellor said life would get “a little bit more back to normal” once High Street shops could reopen.

Street shops are set to happen on Monday in England, while shops in Northern Ireland have already been allowed to resume trading. Scotland and Wales have their own timetables for easing restrictions.

In response to the GDP report, shadow chancellor Anneliese Dodds warned that the UK’s economy was shrinking faster than those of other countries.

She said the UK would need “strong action to help us climb out of this as quickly as possible”.

Naira Value Appreciates against the Dollar

INEC announces date for collection of PVCs across the country