States and LGAs Federal Allocations in April Drop by Over 50%

N606.19 Billion Shared Between the Three Tiers of Government

In its meeting via virtual conferencing, chaired by the permanent secretary, federal ministry of finance, budget and national planning, Dr. Mahmoud Isa-Dutse, the Federal Accounts Allocation Committee (FAAC), share a total sum of N606.19 billion as federal allocation for the month of April 2020.

According to a statement from the ministry released on Friday, this amount was inclusive of VAT, exchange gain, solid mineral revenue, excess bank charges and excess oil revenue.

States saw it’s allocation cut in half, putting a significant strain on the finances of many states. The state allocations dropped by 52.53% to N86.14bn, from the N181.48bn received in March.

Local Government Councils suffered the same fate as States, with it’s allocation dropping by 51.15% to N66.41bn from the N135.95bn received in March. 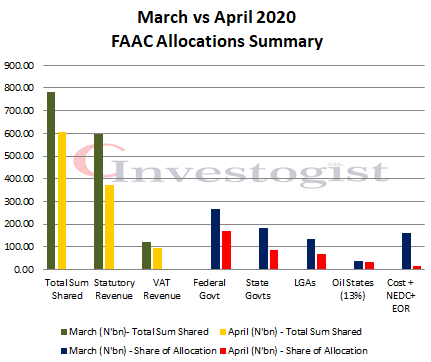 The cost of collection, FIRS refund, allocation to the North East Development Commission and Transfer to Excess Revenue decreased by 90.57% to N15.13bn, against the N160.40bn recorded in March.

The communique released at the end of the meeting also revealed that Petroleum Profit Tax (PPT), Companies Income Tax (CIT), Import and Export Duties, and Oil revenues all recorded decreases from the figures seen in the preceding month.