Nigeria: Status of China loans and the satellite lost in space due to power failure

On Friday, 30th April 2021, the Debt Management Office (DMO) Nigeria published an update on the status of China loans as at December 31, 2020.

The document seen by Investogist shows that as at the date in review, the Federal Government of Nigeria has obtained 15 loans from the China EXIM (The Export-Import Bank of China).

The first loan worth USD200 million was agreed on 12th January 2006 for a Nigerian Communications Satellite. The 12 years tenor loan has been fully repaid including the interest of USD40.02 million at a 3.00% per annum interest rate. It is the only loan that has matured and was fully repaid.

A USD325.67 million loan agreed on 26 April, 2016 for a project titled “Nigerian 40 parboiled rice processing plants project (Fed. Min. of Agric & Rural Dev.)” has received ZERO funding as at the date in review. 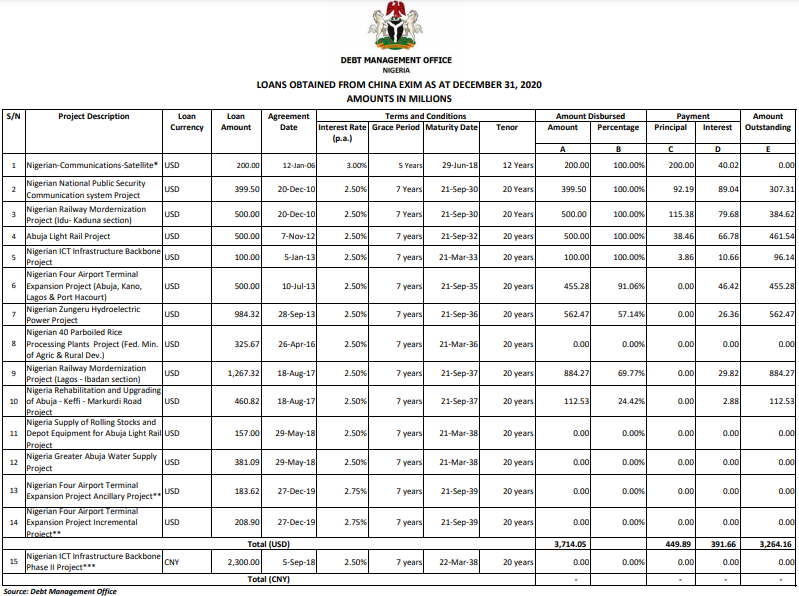 NigComSat-1 was a Nigerian communication satellite, which was built by the China Great Wall Industry Corporation. The initial contract to build it was signed in 2004.

It was launched in China by Nasrda on 13 May 2007, a board a Chinese Long March 3B carrier rocket, from the Xichang Satellite Launch Centre in China, it became the third African geosynchronous communication satellite.

The Spacecraft was operated by Nigerian Communications Satellite Ltd (NIGCOMSAT). Its design was to provide coverage to many parts of Africa on C-band and Ku-band, a global navigation beam on L-band and the Ka-band transponders with spot beams over Nigeria, South Africa and Europe.

On 10 November 2008 (0900 UTC), the satellite was reportedly switched off for analysis and to avoid a possible collision with other satellites. According to Nigerian Communications Satellite Limited, it was put into “emergency mode operation in order to effect mitigation and repairs”. The satellite eventually failed after losing power on 11 November 2008.

On March 24, 2009, the Nigerian Federal Ministry of Science and Technology, NigComSat Ltd. and CGWIC signed a further contract for the in-orbit delivery of the NigComSat-1R satellite. NigComSat-1R also uses the DFH-4 satellite platform with improvements over the previous satellite, and was delivered in the fourth quarter of 2011 as a replacement for the failed NigComSat-1. It was successfully launched on December 19, 2011.

Just in: US Inflation majors rise by highest since 2009