Even though the Debt Management Office (DMO) has consistently said that Nigerian debt is within manageable range in terms debt-to-GDP ratio, Nigeria is on the path to debt crisis considering that 99.217% of the FGN retained revenue in Q1 2020 was used for debt service.

This implies that the Federal Government of Nigeria on average spent 51.96% of its revenue on debt service alone.

This is according to the Medium-Term Expenditure Framework and Fiscal Strategy (MTEF/FSP) report released by the Federal Ministry of Finance, Budget, and National Planning. 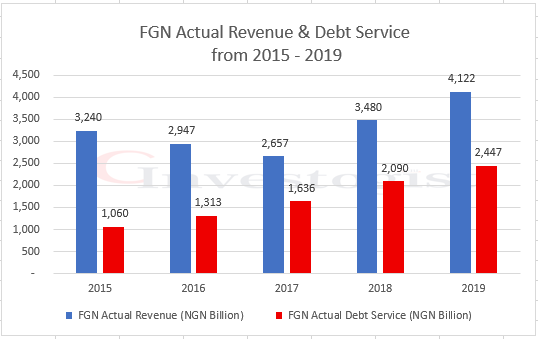 FGN debt portfolio has continued to increase at an alarming rate. It is apparent that Nigeria revenue is declining in 2020 due to the fall in oil prices and the economic crisis due to Covid-19 pandemic, whereas the debt portfolio is rising.

The President of the Senate Ahmad Lawan on Thursday 11 June, said that the senate approved $28 billion (N10.08 trillion) external debt for Federal Government in the past 1 year.

Read also; The current situation is not sustainable: Ndume

This implies that Debt servicing and recurrent expenses will gulp over 73% of the budget, which will be mainly financed by loans. The budget deficit was estimated at N4.17 trillion