The borrowing rate and indebtedness of Nigerian Government  is increasingly alarming. According to the Medium-Term Expenditure Framework and Fiscal Strategy (MTEF/FSP) report recently released by the Federal Ministry of Finance, Budget, and National Planning, N943.12 billion was spent on debt servicing alone between January and March 2020. This represents 99.217% of the FGN retained revenue of N950.56 billion for the same period.

A deep review of the report showed that the actual amount spent on debt servicing rose by 38.4% (N261.74 billion) in Q1 2020 when compared to the budgeted amount for the period.

Whereas, FGN Retained revenue declined by 52% (N950.56 billion) when compared to the prorated amount of N1.966 trillion for the same period.

Government revenue has been greatly affected by the decline in oil prices, as oil is its main source of income. The crash in oil prices, resulted in downward reversal of the 2020 budget oil benchmark from $57 per barrel to $28 per barrel. 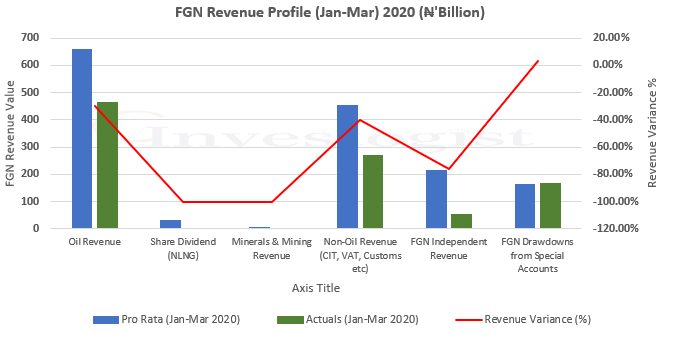 Despite the significant drop in FGN revenue, there was only a slight change in the expenditure column according to the report. Total expenditure amounted to N2.373 trillion, a 2.4% shortfall compared to N2.428 trillion budgeted amount for the period.

Considering that FGN spent over 99% of its Q1 2020 revenue on debt servicing in the period, when economic impact of Covid-19 has not really hit Nigeria and the oil market, one can only assume that the situation might be worse than is being forecasted.

This implies that Debt servicing and recurrent expenses will gulp over 73% of the budget, which will be mainly financed by loans. The budget deficit was estimated at N4.17 trillion.

With the Government not bent on expense reduction especially recurrent expenditure, as can be seen in the recently passed revised budget, which was increased rather reduced, Nigeria’s debt profile is bound to continue on it’s for an upward trajectory.