Total of 7,526 confirmed cases of Covid-19 have been recorded in Nigeria. Out of which 2,174 have been discharged and 221 deaths recorded. However, there are concerns that the number of Covid-19 cases in the country may be much higher due to inadequate testing.

As at 23 May, a total of 43,328 samples have been tested for Covid-19 since the outbreak began according to NCDC in a population of over 200 million people.

Ten states with the largest number of confirmed Covid-19 cases are; 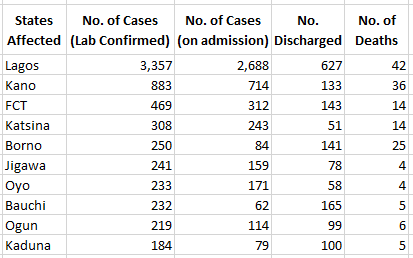 In Rivers state, two patients admitted to the Rivers State University Teaching Hospital had tested positive for COVID-19 according to the Public Relations Officer of RSUTH, Dr Nsirim Larry in a statement in Port Harcourt on Saturday.

According to him, the patients are; a female security personnel working in the hospital and the other a female patient admitted into the labour ward. He said that the doctors and nurses who had direct contact with both patients have been advised by the hospital management to self-isolate.

He added that the hospital is “working to decontaminate the labour ward and radiology unit immediately while sample collection of the direct contacts would begin tomorrow”.

In Cross River State, the state’s branch of the Nigerian Medical Association NMA) says COVID-19 has been killing people in the state even though the State Governor Ben Ayade insists that the state is free of the virus.

The group criticized “the rising number of deaths from suspected cases in the state”, calling for action.

On Wednesday, Investogist reported the number of samples tested for Covid-19 per state in Nigeria, according to a situation report released by the NCDC on May 18. The report showed that only seven tests have been conducted in Cross River state, and just 1 test in Kogi state, the second state without a confirmed case in Nigeria.

“The unacceptable low number of persons tested in Cross River suggests a lack of diligent, expansive and coordinated surveillance response which is the hallmark of effective prevention and containment of Covid-19.” The state branch of NMA said.

Nigeria remains the worst affected country in West Africa. Nigeria has the highest number of confirmed Covid-19 cases and deaths in the region. It is followed by Ghana with 6,617 confirmed cases, 1,978 recoveries and 31 deaths, according to African Center for Disease Control and Prevention.

In China where the Covid-19 out break began in 2019, no new confirmed cases of Covid-19 was recorded on the mainland on Friday.  This is the first time it has seen no daily rise in the number of cases since the pandemic began in the central city of Wuhan.

Read more; The Nigeria’s National Cake: How it is Shared

The National Health Commission (NHC) said in a statement on Saturday that there were two new suspected cases: an imported one in Shanghai and locally transmitted case in the north eastern province of Jilin.

China reported 84,081 cases of Covid-19, with 79332 recoveries and 4,638 deaths. However, there were doubts about the veracity of the figures reported by China and the country has been heavily criticized for its handling of the virus outbreak that has overwhelmed even the strongest health systems.

In Germany, a Church service held on 10 May has been linked to 40 Covid-19 cases. The church officials of the Baptist Church in Frankfurt said they followed social distancing rules and disinfected the building ahead of the service.

States in Germany began easing lockdown measures in early May, with strict guidelines on social distancing rules of 1.5m apart.

Shops are now reopening, pupils are returning to class and the Bundesliga has become the first major football league in Europe to resume after lockdown.

Read also; Nigeria Headed for a Deeper Recession, to Shrink by 8.9%: Finance Minister

In Spain, thousands have gathered in the country’s capital Madrid to protest against the governments handling of the Covid-19 outbreak calling the Prime Minister, Pedro Sánchez to resign. The protesters drove through major cities without leaving their vehicles in order to maintain social distancing.

Spain is the third country in Europe with largest number of confirmed behind Russia and UK. It had imposed one of the strictest lockdown measures on 14th March to control Covid-19 outbreak.

Read further; How Much is the Business Worth: Stories the Asset Values Tell

Though ease of restriction have began in the past few weeks, Madrid and Barcelona have remained under tight lockdown due to their more severe outbreaks of Covid-19.

How Much is the Business Worth: Stories the Asset Values Tell