Conoil Plc (NSE -CONOIL) reported a decline in both revenue and profit after tax for the nine months ended 30 September 2020, according to the unaudited financial statements filed with the Nigerian Stock exchange.

However, the profit after tax for the third quarter (July to September 2020) rose by 16% due to cost control measures implemented by the company despite the 24% decline in revenue recorded in the third quarter compared to Q3 2019.

Conoil made all of the revenue from the sale of petroleum products within Nigeria according to its report.

Major changes in the asset column;

39% of the assets are financed by equity (N20.58 billion) which rose by 6% due increase in the retained earnings to N16.4 billion from N15.3 billion. Whereas 61% of the assets are financed by liability (N31.60 billion) which declined by 18% as the company paid off a short-term borrowing of N9.15 billion, coupled with a N3.65 billion decline in trade and other payables. 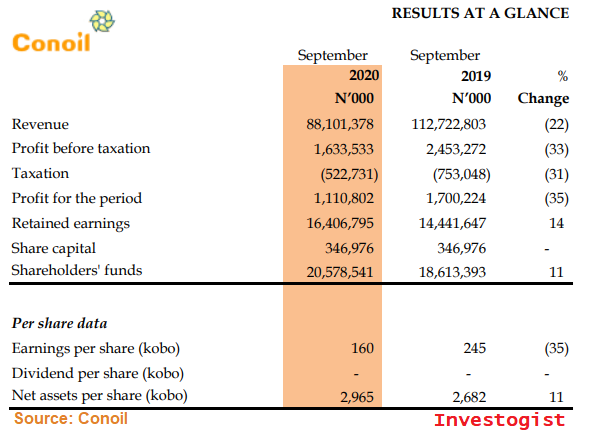 Conoil Plc was incorporated in 1960. The Company’s authorized share capital is 700,000,000 ordinary shares of 50k each. The Company was established to engage in the marketing of refined petroleum products and the manufacturing and marketing of lubricants, household, and industrial chemicals.