In the second quarter of 2020, ending 30 June, Nigeria’s Gross Domestic Product (GDP) decreased by 6.10% (year-on-year) in real terms, ending the 3-year trend of low but positive real growth rates recorded since the 2016/17 recession. This is according to the GDP Report released by the National Bureau of Statistics (NBS).

According to NBS report only 13 activities recorded positive real growth in the second quarter compared to 30 in the preceding quarter. 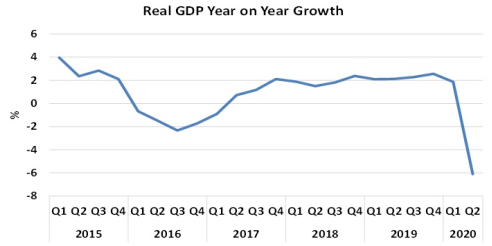 The decline was largely attributable to significantly lower levels of both domestic and international economic activity during the quarter, which resulted from nationwide shutdown efforts aimed at containing the COVID-19 pandemic.

The Minister of Finance at the National Economic Council Meeting held on Thursday 21 May, 2020, said that the Nigerian Economy could shrink by as much as 8.9% in 2020 because of the COVID-19 pandemic. The trend of Nigerian GDP growth rate has been in a continuous decline since 2002 when it recorded a 14.60% growth rate.

The Oil sector contributed 8.93% to total real GDP in Q2 2020, down from figures recorded in the corresponding period of 2019 and the preceding quarter, where it contributed 8.98% and 9.50% respectively.

Transport and Storage, Accommodation and Food Services, Construction, Education, Real estate and Trade among others experienced the highest negative growth. 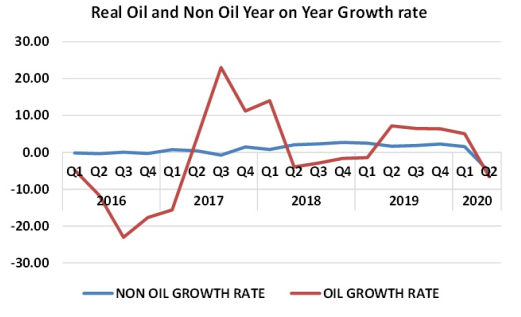 Four sub-activities make up the Agricultural sector: Crop Production, Livestock, Forestry and Fishing. Crop Production remained the major growth driver of the sector, as it accounted for 87.34% of nominal GDP in the sector in Q2 2020.

The real growth rate of the construction sector in the second quarter of 2020 was recorded at –31.77% (year on year), lower by –32.43% points from the rate recorded the previous year.

The Finance and Insurance Sector consists of the two subsectors, Financial Institutions and Insurance,
which accounted for 89.82% and 10.18% of the sector respectively in real terms in Q2 2020.

Gross Domestic Product (GDP) is the total monetary or market value of all the finished goods and services produced within a country’s borders in a specific time period. As a broad measure of overall domestic production, it functions as a comprehensive scorecard of the country’s economic health.

Real GDP takes into account the impact of inflation and allows comparisons of economic output from one year to the next and other comparisons over periods of time.

The impact of the Coronavirus Pandemic was not seen on the Q1 2020 GDP, as the pandemic became global (including Nigeria) towards the second half of March 2020. We expect to see a steep decline in GDP by the second quarter.