FG of Nigeria spent 79.27% of its revenue on personnel costs in five months

The Federal Government (FG) of Nigeria spent 79.27% of its retained revenue on personnel cost in the first five months the year 2020. This Implies that salaries and allowances is gulping majority of Nigeria government’s revenue which has been seriously impacted by the Covid-19 Pandemic.

This is according to the draft 2021-2023 Medium Term Expenditure Framework/Fiscal Strategy Paper, (MTEF/FSP) presented by Minister of Finance, Budget & National Planning, Zainab Ahmed during a virtual consultative public forum in Abuja.

In the period in review, Federal Government retained revenue was N1.481 trillion whereas the actual personnel costs (excluding Pensions and gratuities) stood at N1.174 trillion, slightly down from the budgeted amount N1.178 trillion by 0.3%.

Since the majority of government’s revenue goes into its personnel costs, it simply means that the government had to look for other sources of funds to finance other aspects of the budget expenditures such as debt service, capital expenditure, overheads, Presidential amnesty, among others.

Nigeria has continued to increase its debt portfolio as a result, the amount allocated to debt service has also continued to rise. In the first five months between January and May 2020, the Federal Government of Nigeria spent 72.19% of its revenue on debt service alone.

Total of N1.069 trillion used for debt service by FG in the five months in review, this comprises of N843.78 billion spent on domestic debt and N225.57 billion on foreign debt service.

FG actual expenditure for the five months totaled, N3.344 trillion which was 19.5% down compared to N4.156 trillion budgeted amount for the period. The drop in expenditure is mainly due to 69% shortfall in the implementation of capital expenditure.

Only 31% of the amount budgeted for capital expenditure in the period was released by the FG. Between January and May 2020, FG only disbursed N253.33 billion out of N816.70 billion which was supposed to be released in the five months period.

FG actual non-debt recurrent expenditure amounted to N1.788 trillion for the first five months of the year. The breakdown is as follows; 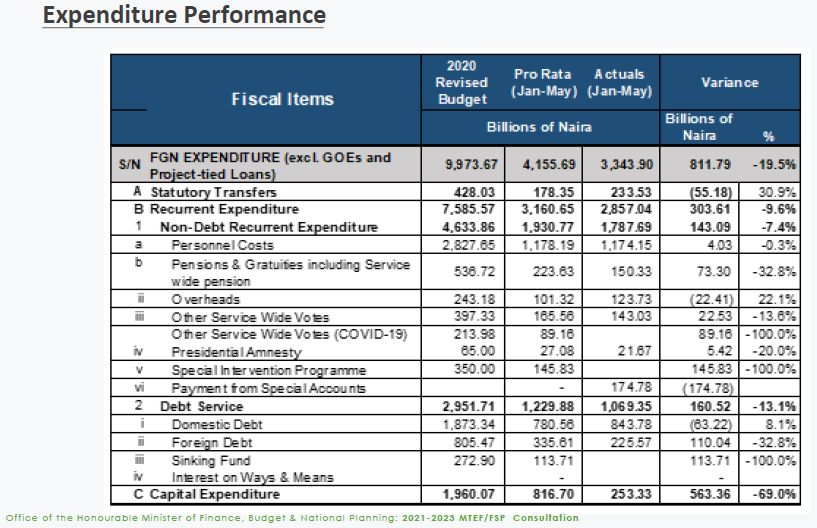