Nigeria has exited recession as the economy recorded its first growth in three quarters due to the relaxation of the movement restrictions across the nation.

This is according to the Gross Domestic Product (GDP) Report for Q4 and full-year 2020 released by the National Bureau of Statistics (NBS) on Thursday.

Nigeria’s GDP grew by 0.11%(year-on-year) in real terms in the fourth quarter of 2020, representing the first positive quarterly growth in the last three quarters.

Nigeria  officially entered a recession as the GDP contracted by -3.62% (year-on-year) in real terms in Q3 2020 (July to September 2020), the second consecutive quarterly GDP decline and the second recession in five years.

In the quarter under review, aggregate GDP stood at N43,564,006.29 million in nominal terms. This performance is higher when compared to the fourth quarter of 2019 which recorded a GDP aggregate of N39,577,340.04 million, representing a year on year nominal growth rate of 10.07%. 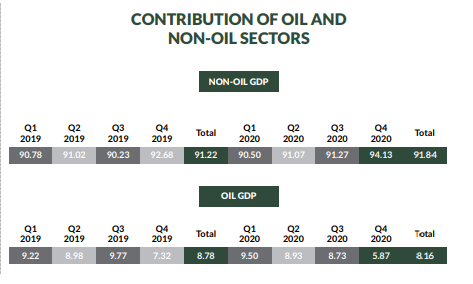 Contribution to real GDP by sectors in 2020 full year

In the fourth quarter of 2020, average daily oil production of 1.56 million barrels per day (mbpd) was recorded.