Jack Ma, China’s fifth richest man and co-founder of e-commerce giant Alibaba will be relinquishing his controlling rights of Ant Group, which owns the Alipay platform.

This is contained in a statement by Ant Group on Saturday, wherein the company announced further corporate governance optimization plans.

According to the statement seen by Investogist, the company stated that Ant Group had on 7th January 2023, received the “Notification on the Adjustment of the Upper-Tier Shareholding Structure” from Hangzhou Junhan Equity Investment Partnership and Hangzhou Junao Equity Investment Partnership, which provides that major shareholders of Ant Group and their beneficiaries intend to adjust the upper-tier shareholding structure of Ant Group, in order to further optimize corporate governance and to align the voting interests of shareholders with their economic interests.

The adjustment which ANT claims is being implemented to further enhance the stability of its corporate structure and sustainability will result in a change of the exercise of voting rights of Ant Group’s major shareholders,  from Mr. Jack Ma exercising voting rights jointly with persons acting in concert, to each of ten individuals (including the founder, representative of our management and employees) exercising their voting rights independently.

“Acting in concert” describes a two or more investors coordinating with each other to achieve the same investment goal.

Ma currently indirectly controls the voting rights represented by 53.46% of Ant Group shares via Hangzhou Yunbo, an investment vehicle for Ma that controls two other entities. 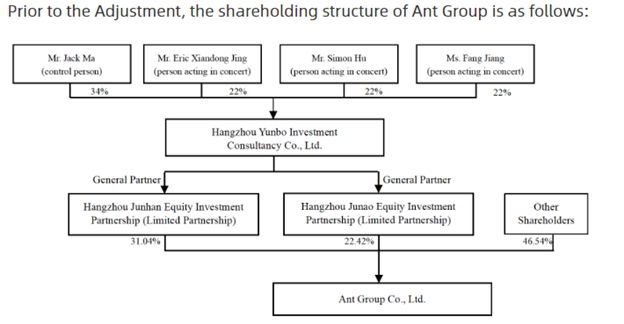 “Mr. Jack Ma, Mr. Eric Xiandong Jing, Mr. Simon Hu and Ms. Fang Jiang hold 34%, 22%, 22% and 22% of the equity interests in Yunbo Investment, respectively. Pursuant to the existing articles of association of Yunbo Investment and the Concert Party Agreement, Mr. Jack Ma effectively can exercise control over the voting results of general meetings of Yunbo Investment for matters relating to the exercise of its rights as a shareholder of Ant Group, and therefore indirectly controls the voting rights represented by the 53.46% of the shares of Ant Group held through Hangzhou Junhan and Hangzhou Junao (each of which is controlled by Yunbo Investment).

“As a result, Mr. Jack Ma is deemed to be the control person of Ant Group prior to the Adjustment.”

The change will remove Ma’s control of the company, and leave him with a mere 6.2% of the voting rights, according to Bloomberg calculations.

The statement by Ant Group adds that as a result of the Adjustment, the shareholding structure of Ant Group will be more transparent and diversified, which will facilitate the steady development of the Company.

In recent years, China has been cracking down on both Alibaba and Ant Group, as well as a host of other Chinese tech giants, over violations of anti-monopoly legislation.

On 24 December, 2020, Chinese regulators launched an antitrust investigation into Alibaba, the country’s biggest e-commerce company. In April 2021, it slammed Alibaba Group Holding Ltd with a record fine of 18.23 billion yuan ($2.8 billion) in its anti-monopoly investigation that found the company abused its market dominance.

Ant Group has been forced to reorganize its operations and structure after Beijing called off its $37 billion initial public offering (IPO) in November 2020. Since then, regulators have been pressuring Ant to distance itself from both Alibaba and Ma and have been planning to turn it into a financial holding company regulated by China’s central bank.

Jack Ma has largely disappeared from the public view over the past two years after criticizing Beijing’s conduct with tech giants.