Crypto Morning: Bitcoin breaks out, gained over $1k within 10 minutes

While last night was a very bad night for President Trump, at the exact time he was impeached, Bitcoin was busy having a beautiful moment. We had been observing the formation of inverted heads and shoulders pattern for over a day now. In my post of yesterday, I explained how it looked like the pattern was not going to hold. But finally, through thick and thin, broken trend lines, narrow ranges, the last shoulder reached the $36.5k neckline completing the pattern. 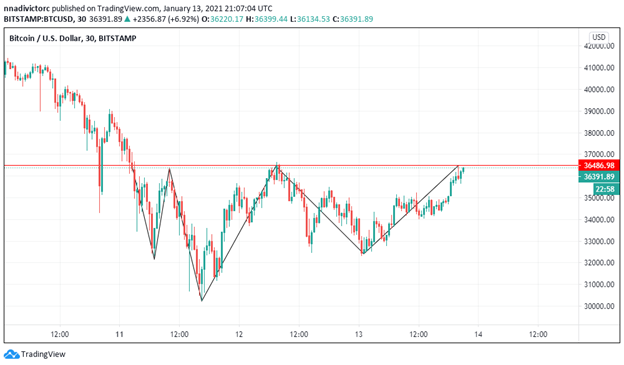 It was a beautiful silent moment, a calm before the storm that we knew was coming.  At about 10:44 PM, it began, the momentum started coming in, Bitcoin broke through the 36.5k ceiling and went straight up to $37.6k gaining over $1k in just 10 minutes, taking Bitcoin market cap briefly above 1 trillion again, before coming back down overnight to retest the former resistance 36.5k now turned support. 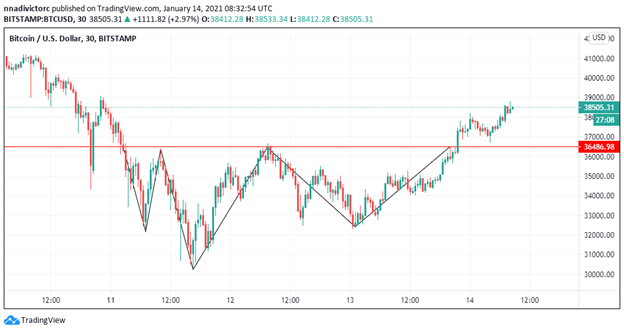 After retesting the support Bitcoin continued its up move and currently sits at $38.4k, gaining over 11% in the last 24 hours. The next point of interest will be the $39k historical and psychological resistance level. If it claims that level, we will be on our way to new highs.

Alt coins are also following the giant. Ethereum and Litecoin have gained over 8% over the last 24 hours, while Bitcoin cash has gained over 5% within the same period.