Twitter has joined Facebook to permanently suspend the account of the US President Donald Trump “due to the risk of further incitement of violence”, according to the company.

“After close review of recent Tweets from the @realDonaldTrump account and the context around them — specifically how they are being received and interpreted on and off Twitter — we have permanently suspended the account due to the risk of further incitement of violence,” Twitter wrote in a statement.

This is coming as tech giants purge the platforms used by Trump and his supporters.

Other actions against Trump or his supporters

Later in the day, Google suspended Parler – a self-styled “free speech” rival to Twitter that is increasingly popular with Trump supporters – from its online store.

Although Trump’s opponents have for years called for Twitter to ban him from the platform, many have said the ban violates free speech enshrined in the First Amendment of the US Constitution.

However, Big Tech argues that they are private companies, not state actors. So, they are free to moderate their platforms as they see fit.

Trump 2020 campaign adviser Jason Miller while reacting to the ban tweeted: “Disgusting… if you don’t think they’re coming for you next, you’re wrong.”

On Wednesday, Twitter blocked Trump’s account for 12 hours after he called the people who stormed the US Capitol “patriots” as the US Congress attempted to certify Joe Biden’s victory in the presidential election. The event lead to the death of people, among them is a police officer.

After the ban was lifted, Twitter said the account would be “permanently” banned if he breached the platform’s rules again.

Mr Trump posted two tweets on Friday that the company cited as the finals straws after he was allowed back on the platform.

In one, he wrote: “The 75,000,000 great American Patriots who voted for me, AMERICA FIRST, and MAKE AMERICA GREAT AGAIN, will have a GIANT VOICE long into the future. They will not be disrespected or treated unfairly in any way, shape or form!!!”

Twitter said this tweet “is being interpreted as further indication that President Trump does not plan to facilitate an ‘orderly transition'”.

In the next, the president tweeted: “To all of those who have asked, I will not be going to the Inauguration on January 20th.”

Trump isn’t the first outgoing president to skip his successor’s inauguration. John Adams, John Quincy Adams and Andrew Johnson did not attend the inaugurals of the men who succeeded them. Richard Nixon left the White House after resigning and did not go to Gerald Ford’s swearing-in.

However, Twitter said this was “being received by a number of his supporters as further confirmation that the election was not legitimate”.

After the ban,  of @realDonaldTrump account, Mr Trump tweeted from the US president’s official @Potus account suggesting he would “look at the possibilities of building out our own platform in the future” and railing against Twitter. 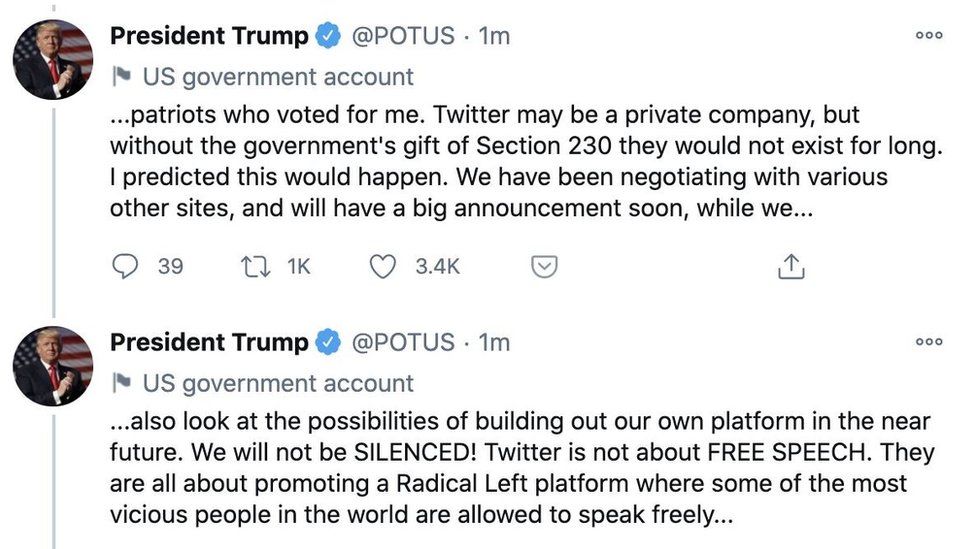 But the tweets were removed from the platform as soon as they were posted.

Fixed Income Market: Bonds Stutter for the First Trading Week of the Year

Fixed Income Market: Bonds Stutter for the First Trading Week of the Year