Transcorp Hotels Plc (TRANSCOHOT), in a press release on Tuesday 30 June 2020, announced that its shareholders have unanimously authorized the Board of Directors to raise N10 billion in a proposed rights issue. 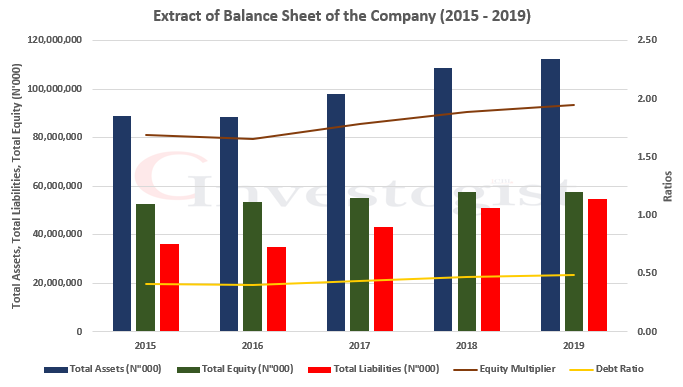 As can be seen from the graph, the equity multiplier which measures the portion of a company’s assets that are financed by shareholder’s equity, has been increasing. A higher equity multiplier number indicates that the debt portion of total assets is increasing which translates to more financial leverage for the company.

Consequently, TRANSCOHOT debt ratio, which measures the extent of a company’s leverage, has also been increasing. The debt ratio can be interpreted as the proportion of a company’s assets that are financed by debt.

A debt ratio greater than 1 shows that a considerable portion of debt is funded by assets, while a ratio below 1 translates to the fact that a greater portion of a company’s assets is funded by equity.

In responding to the unanimous approval, the Chairman of Transcorp Hotels Plc Emmanuel Nnorom noted that “this approval and endorsement of shareholders empowers the Board and management to look to the future with confidence despite the current harsh operating environment.”

The Managing Director/CEO of Transcorp Hotels Plc while welcoming the approval, added that “the world has been greatly impacted by the COVID-19 pandemic, with the hospitality industry being one of the hardest hit.

“However, we are optimistic about a great recovery for the sector and your approval today shows that you also share in this mindset. We will continue to play our part in ensuring a significant recovery to the Nigerian hospitality industry.”

Representing the Ministry of Finance Incorporated on the Board, Mr. Alexander M. A, a Non-Executive Director of the Company, said “given the challenging times the hospitality industry faces, it has become critical to inject funding into the business for a stronger balance sheet.

“Transcorp Hotels has maintained a history of excellent performance in the hospitality industry, and this is a bold step towards the achievement of its long-term goals.”

Transcorp Hotels Plc (“Company”) is the hospitality subsidiary of Transnational Corporation of Nigeria Plc. The Company owns and operates Transcorp Hilton Abuja, which provides luxury accommodation, excellent cuisine, conferencing and leisure facilities to business travelers and tourists from all over the world.

TRANSCOHOT was incorporated under the Companies and Allied Matters Act on 12 July 1994 as a private limited liability company and is domiciled in Nigeria. The registered office is located at 1 Aguiyi Ironsi Street, Federal Capital Territory, Abuja, Nigeria.

An Initial Public Offering (IPO) by TRANSCOHOT to raise about N8 billion from the investing public opened on Wednesday, September 24, 2014. The proceeds of the offer was to be used to part-finance its expansion projects specifically the construction of two new flagship hotels in Ikoyi Lagos and Port Harcourt as part of its broader expansion plans.

The company issued 800 million shares of 50 kobo each at N10 per share via the IPO and the listing of the shares of the company on the Nigerian Stock Exchange (NSE) was done after the IPO. However, information on the company’s website show that the company has only two hotels under management; Transcorp Hilton Abuja and Transcorp Hotels Calabar.

TRANSCOHOT currently have a total outstanding shares of 7,600,403,900. Transnational Corporation of Nigeria Plc (TRANSCORP) holds 83.47% of the shares, while the Ministry of Finance Incorporated owns 11.02%. 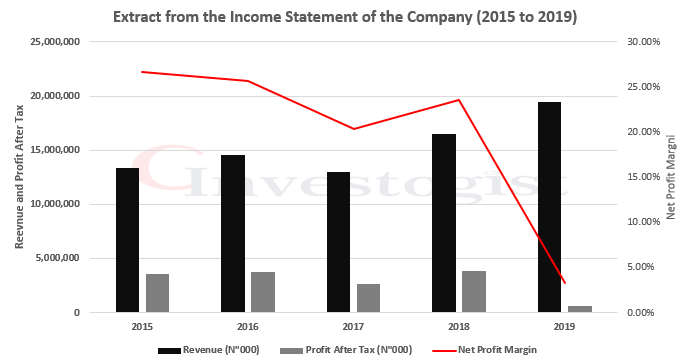 With TRANSCOHOT recording a loss of N686.53 million for the period ended 31 March 2020, we expect the next financial report (First half for the period ended 30 June 2020) to be amongst the worst in the company’s history given the restrictions and disruptions caused by the Covid-19 pandemic.