From a peak of $11.5bn under GEJ to $376.65k under PMB, how the OBJ created Excess Crude Account got depleted

While the nation was still dealing with the news in the preceding week, that Nigeria’s debt servicing cost had overtaken revenue by more than ₦300bn, the Office of the Accountant General of the federation dropped another shocking money related data.

To understand the Excess Crude Account (ECA), one has to look at it in the simplest way possible.

Consider for example, a Palm Wine tapper that has planned to feed his family from the money he makes from selling palm wine. He knows he gets 10 liters of palm wine from his farm everyday, and that 1 liter sells at ₦100.00.

He knows therefore that everyday he will make ₦1,000 from selling palm wine, and he has calculated what he will use the money for in the interest of his family.

That was the same thinking behind the President Olusegun Obasanjo’s administration in setting up the Excess Crude Account.

For illustration: The 2021 annual budget of the Federal Government was prepared with an oil price of $40.00 per barrel. In the course of the year, the price went up to $79.31 per barrel. The difference in price, $39.31 per barrel of oil sold goes into the Excess Crude Account.

The Excess Crude Account stood at $2.1 billion when President Buhari took over in 2015.

Nairametrics in its report on July 29, 2022 titled “How Nigeria’s Excess Crude Account got depleted” chronicled the journey of the ECA from inception to date.

Below is an extract from that Nairametrics’ report:

The Excess Crude Account was set up during President Olusegun Obasanjo’s administration in 2004 to save oil revenues above the budget benchmark for crude oil prices. The account belongs to all three tiers of government and withdrawals can only be made when all the tiers agree.

As of the end of former president Obasanjo’s administration in May 2007, after which late Musa Yar’aradua came in as the president, Nigeria’s excess crude account was at $20 billion, $5 billion of which had been pledged by the three tiers of government to fund the National Independent Power project, leaving the balance at $15 billion.

In 2008, the state governors instituted a suit at the Supreme Court saying that the balance of $15 billion from the ECA should be shared immediately, quoting provisions of the constitution, which support their claim.

Later in 2009, the then president Musa Yar’adua opted for an out-of-court settlement and by the end of 2009, the balance had dropped to $6.5 billion, indicating that the ECA lost $8.5 billion in the space of 2 years. 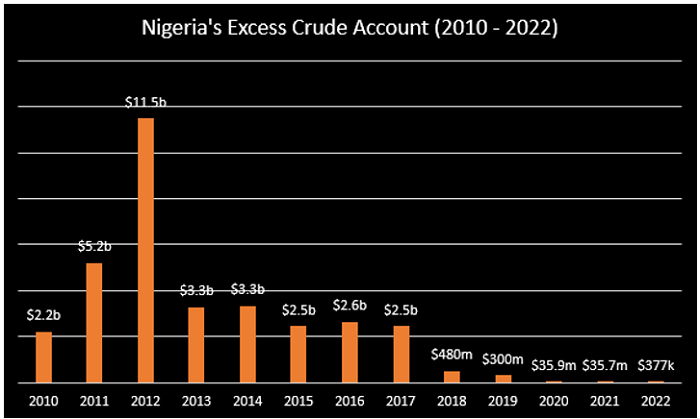 In the year 2010, when Goodluck Jonathan assumed the position as the acting president, the state governors returned to request the immediate payment of the $6.5 billion balance. Just as the case of the former president, Jonathan reached an agreement with the governors and $2 billion was spent in addition to the sum of N339 billion spent to augment the arrears from the three tiers of government for the federal allocations in May 2010.

Later in August 2010, the state governors returned for the $4 billion balance, in which the president agreed to withdraw some of the funds, taking out $3 billion from ECA from which $1 billion was paid into the Sovereign Wealth Fund, while the remaining $2 billion was shared.

In 2011, the state governors returned to the Supreme Court to request for the remaining $1 billion which was in the Sovereign Wealth Fund to be shared. Despite some pullbacks from some of the governors, the fund was eventually shared, leaving the account at a little over $2 billion for the next administration in 2015.

The Central Bank disclosed in its annual report for 2018 that Nigeria’s Excess Crude Account dropped to $480 million from $2.45 billion recorded as of the previous year. According to the apex bank, the drop-down in ECA between 2017 and 2018 was due to significant draw-down to bridge the financing gap between the three tiers of government.

The Federal Government under President Muhammadu Buhari was accused of mismanaging the country’s Excess Crude Account earlier in 2019, especially the $1 billion reportedly spent on military equipment.

According to Garba Shehu, the Senior Special Assistant on Media and Publicity to the president, while responding to the controversy of how the withdrawn $1 billion was spent, he said that various procurements were made for the purchase of critical equipment for the Nigerian Army, the Nigerian Navy, and the Air Force.

“The record we have is that the Buhari’s administration paid $496 million for a dozen Super Tucano fighter aircraft for the Air Force in a direct, government-to-government (no contractors or commission agents) transaction with the government of the United States of America. They are due for delivery in 2020.

“Various other military procurements for critical equipment have been made. These are for the Nigerian Army and the Nigerian Navy, amounting to $380.5 million. These procurements include money for the purchase of Navy Lynx helicopters.

“The total amount spent so far is $876.8 million. The equipment paid for has due dates of delivery of between six months to two years. Balance of the money that is unspent as at today is $123.1 million.

“The entire expenditure involved in these exercises is on the basis of government-to-government procurement. In cases where the Nigerian government dealt with equipment manufacturers, their home governments have in all cases given guarantees to the Federal Government.

“Again, it is important to stress that no contractors or commission agents have been involved in the procurements under discussion,” Shehu stated.

Earlier in the year, the Special Assistant to President Muhammadu Buhari, Tolu Ogunlesi explained that the excess crude oil declined as a result of spending on security, refunds to states as well as investment in Sovereign Wealth Fund.

“Part went to Paris Club Refunds to States and a substantial portion invested into the Sovereign Wealth Fund/NSIA,” he said.

The most recent in the country’s ECA is a drop from $35.7 million to $376,655, which has been attributed to an advance payment for the purchase of brand new Offshore Patrol Vessels for the Nigerian Navy.

“The $35m disbursement from the Excess Crude Account (ECA) is from June 2022, & is an advance payment for the purchase of brand new Offshore Patrol Vessels (OPVs) for the #NigerianNavy, as part of efforts to consolidate on maritime security gains recorded in the Gulf of Guinea.”

In summary, as the palm wine tapper would inevitably experience days when the price of palm wine will be less than ₦100.00 per liter, and also days when he couldn’t produce 10 liters per day, so will the experience of Nigeria be with regards to crude oil prices and production.

When those days come knocking on the door, the Excess Crude Account would have bailed out the nation.