As the number of confirmed Covid-19 cases continue to rise in Africa and Nigeria in particular, there were reports on Saturday in the local media which suggests that Nigeria holds the second largest Number of confirmed cases in Africa. The articles quoted WHO as the source of information but this suggestion is inaccurate.

One of such articles was written by Nairametrics titled “COVID-19: Nigeria with second largest cases in Africa- WHO,” . This suggestion is not accurate as Nigeria does not hold and has never held the second largest confirmed cases of Covid-19 in Africa. Although the writer has his reasons for alleging such based on the Tweet by WHO African Region.

Facts about Covid-19 in Africa

According to the Africa Centre for Disease Control and Prevention, the total number of confirmed cases of Covid-19 in Africa as at Friday, 17 July was 665,552 with 346,153 recoveries and 14,434 deaths.

Top five African countries with largest confirmed cases according to African CDC rounded to the nearest hundred are; 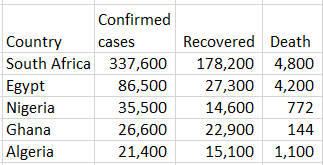 Although the tweet by the WHO African Region shown below as well as information on its website, appear to show that Nigeria has the second largest number of confirmed Covid-19 cases in Africa, however that is not the case.

The African Region does not include all the countries in Africa, including Egypt which holds the second largest number of cases on the continent. Under WHO division some African countries such as Egypt, Libya, Morocco, Tunisia, Sudan etc are classified under Eastern Mediterranean Region.

You must be Flexible in order to Succeed in Business

How much is the Business worth: The Cash Flow Statement

How much is the Business worth: The Cash Flow Statement