The National Broadcasting Commission (NBC) has announced a temporary suspension of shutdown of indebted broadcast stations.

The suspension was announced by the commission in a press release on Friday.

The commission had issued a shutdown notice on August 19 2022, to stations that are indebted to it.

NBC said the decision to suspend the shutdown followed “positive responses from the debtor Licensees, including big players in the broadcast industry.”

The press release signed by the Director General, Balarabe Shehu Ilelah read in part, “Following the ultimatum, the Commission received positive responses from the debtor Licensees, including big players in the broadcast industry.

“Sequel to a follow-up meeting held with Executives of the Broadcasting Organisations of Nigeria (BON), and other critical Stakeholders in the industry, the commission has decided to temporarily suspend the shutdown of the indebted Broadcast stations all over the Country

“We express Our profound appreciation to the Broadcasting Organisation of Nigeria, the affected licensees and Broadcast Stakeholders for their responsesand interventions.

“We, specifically, thank DAAR Communications Ltd and Silverbird TV/Rhythm FM for their responses.

“The Commission is not unaware of the difficulties this shutdown must have caused the operators and other stakeholders, but must state that the Commission will always operate within the National Broadcasting Commission Act, Cap. N11, Laws of the Federation, 2004.” 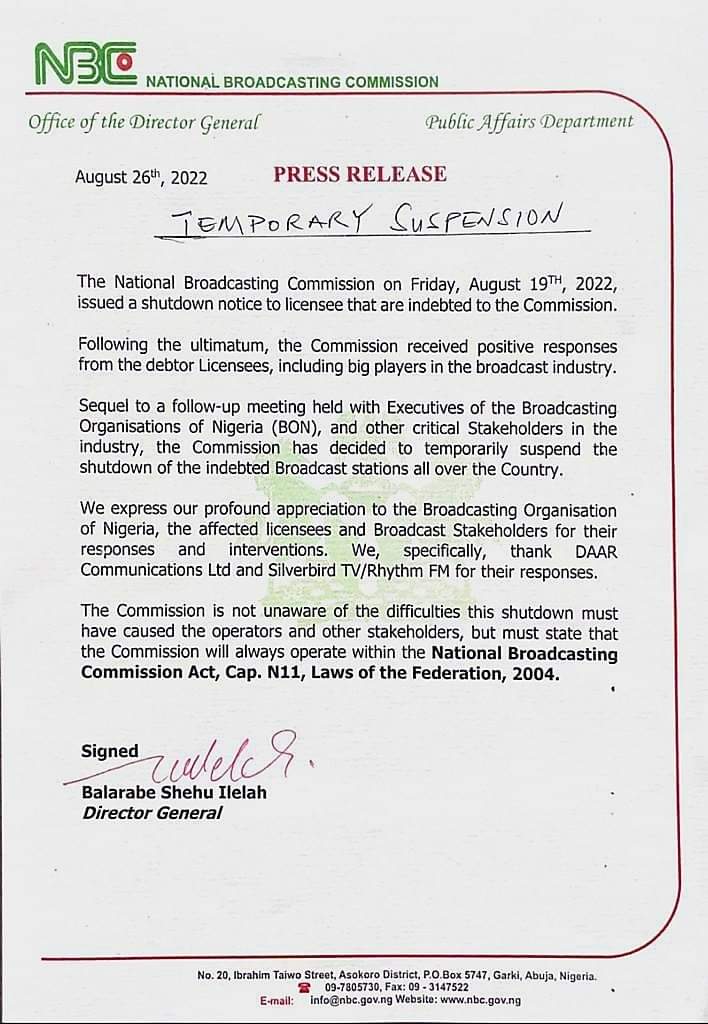