Baker Hughes Rig Count for May: Worldwide Rigs Drop by 338

The Baker Hughes rig counts are counts of the number of drilling rigs actively exploring for or developing oil or natural gas in the U.S., Canada and international markets. The Company has issued the rig counts as a service to the petroleum industry since 1944. 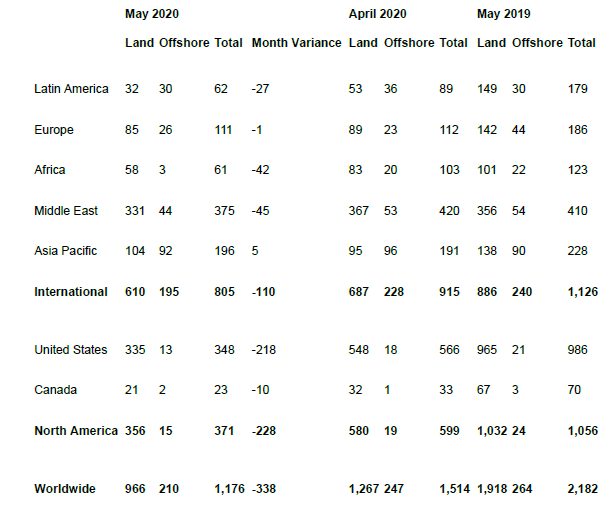 Following the emergence of the Coronavirus outbreak at the beginning of the year, and the ensuing lockdowns imposed by most nations to contain the spread, the price of crude oil collapsed.

An analysis of the rig count reports from December 2019 to May 2020 by Investogist, as can be seen in the graphical representation below shows the extent of the impact of the pandemic on the drilling industry. 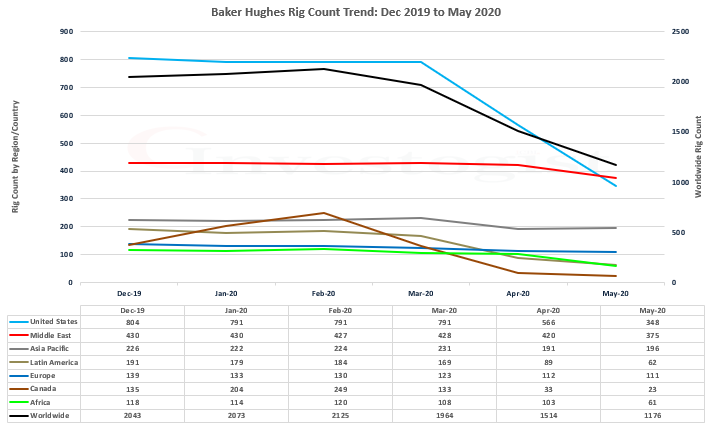 To put this into perspective and how it affects many people, consider that an oil rig operates on a 24 hour basis, with 3 shifts per day. An average of 75 people are directly employed by the drilling company to run the rig (this is excluding sub-contractors and suppliers).

Between December 2019 and May 2020, active rigs has reduced by 867, that means that 65,025 (867 rigs x 75 persons) people have been made redundant due to the rigs stopping operations. That is 65,025 jobs in drilling companies alone, and when the sub-contractors, and suppliers who has seen their revenue dry up, are added to the mix, the numbers will be approaching half a million.

An effort to prop up oil prices, and save companies and jobs, saw a historic deal to cut oil production by 9.7 million barrels per day, agreed by OPEC+ and other major oil producing countries in April 2020.

The anticipated effect of the deal which is in its second month is working as oil prices has crept up to $42.08 for benchmark Brent, and $39.10 for the Western Texas Intermediate (WTI).

A rising oil price poses a conundrum for the industry; it will encourage Oil companies who had stopped production due to the new prices to resume operations. It will get more rigs into operation, returning much needed jobs to many people, and see revival of economic activities in the sector.

These welcomed activity will on the other hand bring about an increase in oil production, threatening the production cuts that has ensured the rise in oil prices.