Last week was an incredible and important one for the finance industry. We saw the stay at home retail traders go against Wall Street institutional traders and actually win, putting the big guys at the brink of bankruptcy. In this article, I’ll be going over the entire story and why it matters to you and the integrity of the seen and unseen stakeholders in your financial life. 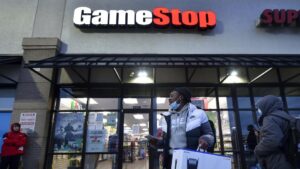 The company announced a rearrangement of leadership on January 11, 2021. Ryan Cohen is an activist investor and cofounder of online pet supplies store Chewy. Ryan had bought enough shares of the company’s stock to gain three seats on the board of directors. Ryan thinks he can turn the trajectory of the company around by pushing most of its product offerings online.

For two reasons, this news caused excitement in the minds of a particular class of investors and traders, a class that even traditional Wall Street knows very little about. Reddit is a network of communities based on people’s interests. Each community has a dedicated group message board called a subreddit.  r/wallstreetbets is one of those subreddits on Reddit. r/wallstreetbets is a community of investors and traders from diverse backgrounds, risk appetites, strategies and investment experience, with most looking to make outsized returns by making equally outsized and risky bets in the financial markets.

Occasionally WSB members publish posts called due diligence or DDs explaining a trade idea and their reasons behind it. One investment strategy that is very common in WSB DDs is following the smart money. In this strategy they try to be early enough to identify a stock that is being quietly backed by a renowned investor. For instance, they would be interested in a stock that Warren Buffet is quietly buying, or a stock that is quietly backed by Sequoia capital that has a successful investment history including Google.

For Gamestop, WallStreetBets had so much confidence in Ryan Cohen because of his success with Chewy and they have since expressed interest in the company by buying its stock. From a low of $3.25 in March 2020, the stock closed at $18.84 in December 2020. The stock closed on January 22 at $65.01. However some investors on Wall Street thought the price was unreasonably high and were certain that it would drop. Andrew Left of Citron research was especially vocal about it predicting that the stock would crash below $20.

These investors decided to bet on the fall of Gamestop stock price. To do this, they had to borrow the stock from the brokers and sell at the current price, hoping that their thesis would turn out right and the stock price would fall. They would then buyback at the lower market price, return the shares to the broker and pocket the difference between the sale price and the buyback price.

On further investigation, it was discovered that the short interest was indeed very notorious. Bearish investors had in fact sold more shares of GameStop than what actually existed. This is called a Naked Short and should be illegal. This angered the WallStreetBets traders. This anger plus the fact that they were already interested in the stock because of Ryan, plus the fact that many redditors are gamers, made them more aggressive in collective purchase of the stock.

By piling into the stock, they made the price soar far above the levels the institutions started their short position. This means that if the institutions were to close their positions, they would have to buy it at a higher price than they sold it, pocketing a huge loss. This buying process would cause the price of the stock to move even higher. This process is called a short squeeze.

This increase in price also meant that if the institutions wanted to leave the trades open, the share loan interest would be higher because of the higher price of the stock.

Here’s the craziest part. WallStreetBet traders didn’t just buy shares of the stock, they bought call options as well. Call options allow you the rights to larger amounts of shares than the worth of the amount in cash you pay. To make the market for you, the broker would have to hedge the position by buying an amount of the stock, the minimum amount of this stock the broker is required to buy is called the DELTA. If the price of the stock increases, the DELTA increases, and the broker would have to buy more and so on. This increase in the DELTA is called GAMMA. And the process of brokers having to buy more shares as the price of the stock increases is called a gamma squeeze.

So three things were making the price of the stock go up, the WSB army buying in, the short squeeze – institutional short traders scrambling to cover their positions by buying back shares and the gamma squeeze – brokers trying to maintain their delta requirements by buying more shares. The short institutions and the market makers were getting screwed and the stay at home retail traders were winning. For the first time in history, “smart money” was bleeding and “dumb money” was winning. Were the big boys going to let this continue?

The first blow came when Discord brought down the WallStreetBet server from their platform for “hateful and discriminatory content”. The moderators of the subreddit quickly and temporarily made it private for fear of losing the reddit platform as well. Later on in the day, Robinhood, the most popular retail broker, started restricting buy orders on $GME stock, limiting it to close only. Other brokers followed suit. This action from the brokers was very questionable as the institutions were still able to buy and sell. This restriction created a panic that made the price drop from as high as $500 to as low as $132.

Zooming into the details about the whole event reveals a possible abuse of power and protection of interests on the side of the institution. One of the institutions that was dangerously short $GME is Melvin Capital. Melvin Capital has some interests from Citadel LLC, and was able to receive an emergency cash injection of over 2 billion dollars from Citadel LLC to deal with the short position. Now, Citadel LLC also owns Citadel securities, the high frequency trading outfit that makes market for Robinhood’s clients. Citadel securities pays Robinhood for this privilege to help execute their customers’ orders in their dark pools. This makes up over 40% of Robinhood’s revenue.

There is wide spread speculation, that Robinhood engaged in market manipulation by stopping their client’s ability to buy shares to trigger panic selling that would drive down the price to levels that would make it easier for the bleeding hedge funds to get out, though still very hurt, but alive.

The events triggered a swift response from a wide range of lawmakers, from Rep. Alexandria Ocasio-Cortez (D-N.Y.) to Sen. Ted Cruz (R-Tex.), who said they supported an investigation of Robinhood’s decision to block trading in GameStop. Rep. Maxine Waters (D-Calif.) announced that the House Financial Services Committee would hold a hearing to examine how the market “has been manipulated by hedge funds and their financial partners to benefit themselves while others pay the price.”

Class action law suits have also been filed against Robinhood by a number of WSB members that were affected by the trading halt. This is still an unfolding story and it will be interesting to see who gets the cane on this one. Will the big Wall Street entities go scot free again?

While this was ongoing, other WSB members were looking for other short squeeze targets. American cable television $AMC, Nokia Coporation $NOK and Palantir Technologies $PLTR came on the radar.  But what we know is that Gamestop was an outlier case and there may never be anyone like it again.

In the quest to find a similar opportunity, we have seen traders try to pump and dump Dogecoin, and just few hours ago, XRP as well.

The take away from these events is that the stock market still has some lingering old bad habits by the big WallStreet elements that need to be checked with appropriate regulations. Shorting shares that do not exist – Naked Short should not be legal.

The events have also shown that the market is changing and is adopting new habits as well. Social media and the internet has created a huge platform for retail investors to invest with little capital, discuss their trade ideas together in real time and mutually learn about investing. On the flip side, it has also created a window for market manipulation from the retail side by giving them the ability to agree and crowd source buying power to influence the price of securities. This poses a big threat to the integrity of the market and the SEC has to look deeply into these issues.

Victor Nnadi is an Independent Economics Researcher and a Securities Trader.

Just in: US Inflation majors rise by highest since 2009