After years using government determined exchange rate, the Central Bank of Nigeria (CBN) has adopted the NAFEX/I&E Window exchange rate on its website. 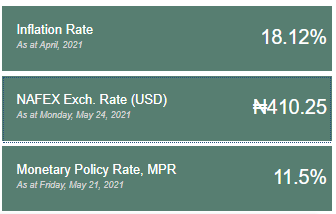 The apex bank had on 14th May 2021 removed the official exchange rate of N379/$1 from its website, a move seen as step towards the adoption of the NAFEX exchange rate for official transactions.

The official rate of N379/$1 has been retained by the CBN on its website since August 2020, when it last adjusted the exchange rate.

The CBN in 2017 introduced the NAFEX (Nigerian Autonomous Foreign Exchange Rate Fixing Methodology) in response to currency crisis at the time.

According to Nairametrics, a circular published on April 24th, 2017 by FMDQOTC where the exchange rate is determined by the market read in part:

NAFEX is the FMDQ reference rate for foreign exchange (“FX”) activities in the Investors’ & Exporters’ FX Window and is designed to represent Spot FX market rates in the Window. NAFEX rates will be generated independently and objectively and published every business day at 12 noon or at a time advised by FMDQ.”

A quote from the FMDQOTC.

“NAFEX is a polled rate based on the submissions of ten (10) contributing banks and calculated using a trimmed arithmetic mean. Upon receipt of quotes, the individual contributing banks’ submission is ranked in descending order. The lowest and highest two (2) quotes are eliminated from the ranked rates leaving only the middle six (6) rates. The arithmetic mean of the remaining rates are then calculated to two (2) decimal places and disseminated as the NAFEX Spot Rate.”